Geologic terrain map of the Indiana portion of the Newburgh quadrangle, Indiana-Kentucky (1996) 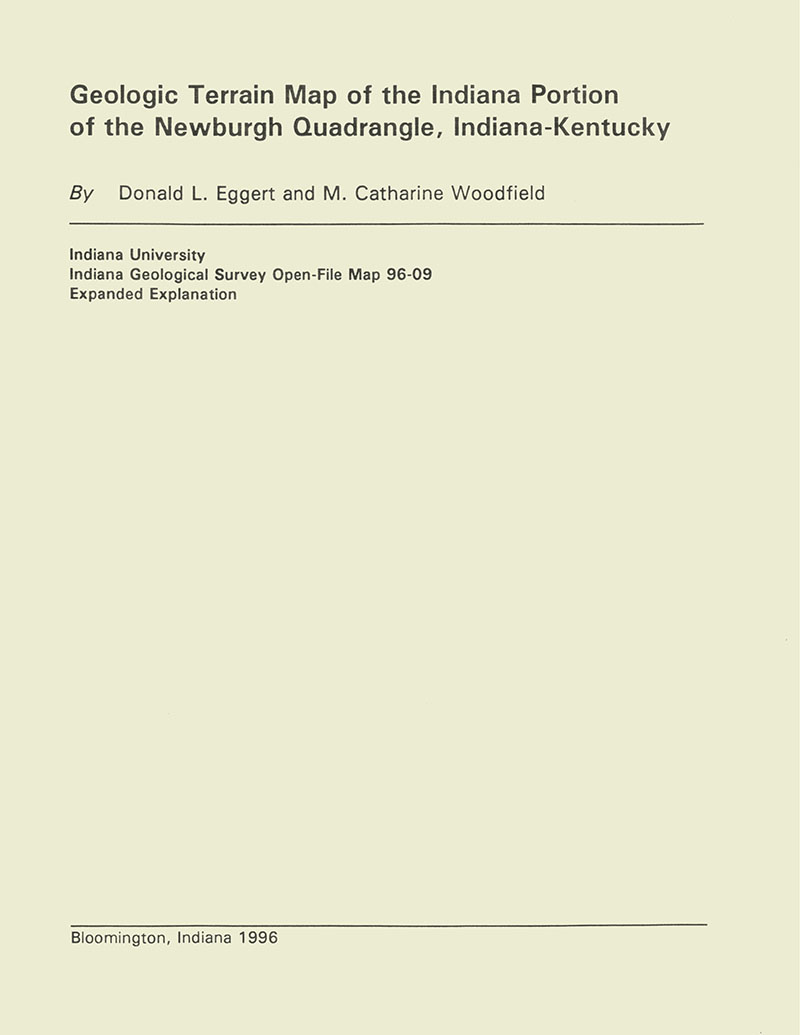 INTRODUCTION: This report is a summary of the second part of a three-year project to produce geologic terrain maps of the four 7.5 minute quadrangles that encompass Evansville, Indiana and surrounds. Discrepancies may be noted between this and the previous map. We will address these discrepancies during the current project when a compilation of all four quadrangles are complete. Since 1989, researchers at the Indiana Geological Survey have expanded efforts to assemble and disseminate information about geologic settings, primarily in thick saturated unconsolidated deposits, that help to refine urban seismic-hazard maps and to predict the effects of surface-mine blasting on nearby structures. The closure of the surface coal mine nearest Evansville has eliminated concerns about the effects of mine-blast damage in the area for the present. Recent investigations of surface-mine blasting effects on man-made structures has increased knowledge of the distribution, nature, and extent of unconsolidated deposits. The data gathered during this research provides information vital to our current geologic terrain mapping and seismic-hazard investigations in the area. To meet the need for geologic and seismic-hazard maps, state and locally funded research in the Evansville region began in 1990. This research led to the present STATEMAP and National Earthquake Hazards Reduction Program (NEHRP) investigations of this region. J. David Frost, Georgia Institute of Technology, Atlanta, received a two-year contract from the United States Geological Survey, NEHRP to develop Geographic-Information-System maps showing soil-associated seismic hazards. For the past two years the Indiana Geological Survey has received support to develop geologic terrain maps of the Evansville North and South and Newburgh 7.5 minute quadrangles from the USGS STATEMAP Program. The Georgia Tech and IGS programs share data files that contain more than a thousand engineering borings, natural gamma-ray logs, water well records, sample descriptions, and other geotechnical records. This report and the accompanying Geologic Terrain Map of the Indiana Portion of the Newburgh Quadrangle are the products of the second year of STATEMAP funding. Interpretations of the geology of this region is being continually refined and updated as new data are accumulated; therefore, some differences in interpretation of the nature of the materials depicted on the latest quad may be noted.

Glacial terrains of the Orland and the Indiana part of the Bronson South 7.5-minute quadrangles

Glacial terrains of the Mongo, Wolcottville, and the Indiana part of the Burr Oak 7.5 minute quadrangles, LaGrange and Noble Counties, Indiana