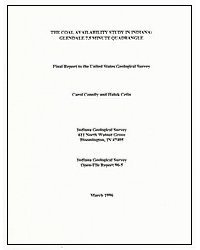 ABSTRACT: This study estimates the availability of coal resources in the Glendale 7.5 Minute Quadrangle, Daviess County, in southwestern Indiana. The total original coal in place, remaining coal after mining, and available coal resources were calculated for four coal beds underlying the study area. In ascending stratigraphic order, the four coal beds which belong to the Raccoon Creek Group of the Pennsylvanian System are Lower Block Coal Member, Upper Block Coal Member, Buffaloville (Minshall) Coal Member of the Brazil Formation, and an unnamed coal of the Staunton Formation herein informally termed the "Holland" coal because of its stratigraphic position relative to the Holland Limestone Member of the Staunton Formation. Other coal beds are present in the quadrangle but are not considered in this report either because there is too little information to accurately calculate resources or the coals are present only locally. Resources were calculated by assigning each coal data point to one of two coal thickness categories, "14-28 inches," or "greater than 28 inches," and to one of two overburden thickness categories, "0-200 feet" or "200-1000 feet." In addition, the coal resource relative to each data point was characterized by four levels of data reliability or confidence. The reliability categories express the relative confidence in finding coal at a particular location based upon distance from a data point. The four categories are: measured (0-0.25 miles from the data point), indicated (0.25-0.75 miles), inferred (0.75-3.0 miles), and hypothetical (3.0-10.0 miles). The four coal beds comprised 492 short tons of total original resources in the study area. Of the 492 million short tons, 7 million short tons have been removed by mining or lost in the mining process, thus leaving 485 million short tons of remaining resources. Because of land-use and technological restrictions, 256 million short tons (52% of the original resources or 53% of the remaining resources) are available for mining the area