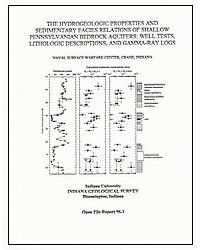 ABSTRACT: The relation between the hydrogeologic properties and sedimentary facies of shallow Pennsylvanian bedrock aquifers was examined using aquifer tests, sedimentologic descriptions, and gamma-ray logs. The main goal of the study was to determine if it would be possible to quantitatively estimate aquifer properties from facies description and logging information alone, without conducting additional aquifer tests. Eight sites were examined at the Naval Surface Warfare Center, Crane, located in Martin County, Indiana. Facies descriptions were gathered from three sources: detailed core descriptions, lithologic columns derived from these core descriptions, and driller's logs. Gamma-ray data were collected with a conventional logging tool. Aquifer (slug) tests were conducted in wells that contained screened zones entirely within the Pennsylvanian facies of interest. Following review of core and drilling data from all the sites at which aquifer tests were planned, a list of eight facies was assembled for classification of core descriptions and report columns, and a list of six facies was assembled for classifications of driller's logs. All sediments within the screened depth intervals fo the tested wells were assigned to oen of these facies. Slug tests were conducted in these wells to determine the bulk hydraulic conductivity within the immediate vicinity of the screened depth intervals of the wells. The measured hydraulic conductivities varied over five orders of magnitude, from about 10-4 m/s to 10-9m/s (10 to 0.0001 Darcies). Gamma-ray logs within these wells revealed variations in raw counts from 10 to over 250. Data were combined using linear and non-linear inversion techniques to derive relations between sedimentologic facies, gamma-ray signals, and bulk hydraulic conductivities. It was determined that facies data alone, even data derived from detailed core descriptions, was insufficient for estimating hydraulic conductivity within shallow aquifers to better than a factor of about 5 x (+400% to -80%). The addition of gamma-ray data improved the estimates to within an average factor of 3 x (+200% to -67%). Selective filtering of several extreme values improved the average error to a factor of 2 x (+100% to -50%), approximately the uncertainty associated with the field measurements alone. While encouraging, the utility of these results remains to be tested through modeling and additional field measurements.