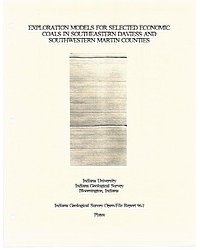 INTRODUCTION: The middle portion of the Pennsylvanian System in Indiana (upper part of the Mansfield Formation and the Brazil Formation) is important to the state because it contains economic coal deposits of high quality. However, an integrated detailed study of the distributions, qualities, and related rood and floor facies of coal seams within this interval has never been previously conducted. In fact, the Brazil and Mansfield Formations in southern Indiana, particularly in Daviess, Dubois, and Spencer Counties were previously considered to be nearly impossible to separate stratigraphically (see Shaver et al., 1986). This belief is manifested in the tradtional coal exploration strategies for this part of Indiana which rely on mining histories, extensive drilling, and luck ( as much as anything else) in finding low-ash, low-sulfer coal with apparently little regard to the geologic context of the coal-bearing interval. Our report summarizes the results of an evaluation of middle Pennsylvanian low-sulfer coals in southeastern Daviess County and southwestern Martin County conducted by the Indiana Geological Survey and funded in part by the Indiana Department of Commerce Coal Research Program in October 1994. The investigation is part of a larger study titled: Evaluating the Potential for High-Quality Coal Resources in Southwestern Indiana. The interval was selected because it contains economically significant low-sulfer, high-BTU coal deposits, particularly the Lower Block Coal and Blue Creek Coal. Our investigations reveal that the details of middle Pennsylvanian geology of the area can be utilized to predict coal occurrences and plan exploration strategies even in regions with relatively little subsurface information. The report outlines the techniques utilized to collect detailed information on the geologic context in which select economic coals (particularly the low-sulfur coals) occur in the study area, and then interprets this information and presents coal exploration and production strategies for specific coals within the study area.