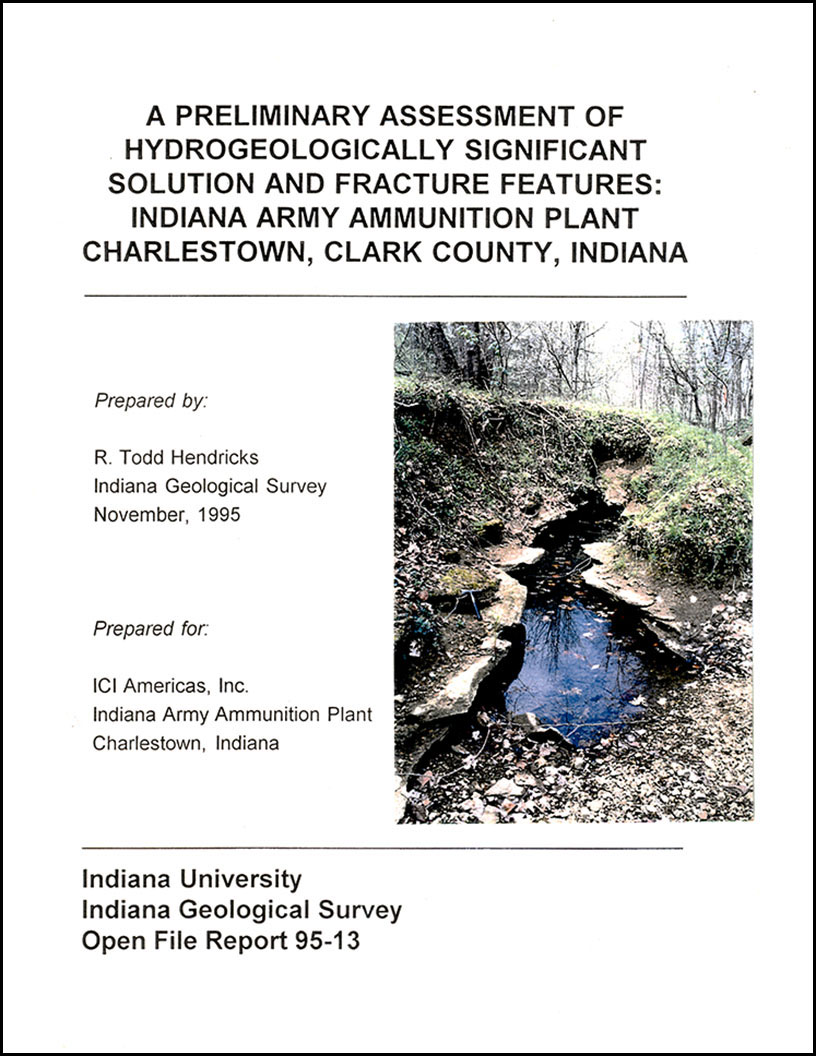 EXECUTIVE SUMMARY: The hydrogeology of the Indiana Army Ammunition Plant and surrounding areas is profoundly influenced by the nature of the lithostratigraphic units present, the orientation and characteristics of bedrock joints and fractures, natural karst processes, and post-1941 wastewater-enhanced dissolution. The Whitewater Formation and the Osgood Member of the Salamonie Dolomite are resistant to karst processes because of their argillaceous, dolomitic composition. Because of its low permeability and dolomitic composition, the Laurel Member of the Salamonie Dolomite is important as an aquitard. The Waldron Shale, because of its composition and mineralogy, forms a barrier to downward migration of water in many cases, but where high flow volumes or long-term flow are present, the shale is quickly weathered away dues to it's characteristically poor slake resistance, and springs emerge along the top of the Laurel Member. By virtue of their mineralogy, the Louisville Limestone and Jeffersonville Limestone are predisposed to natural dissolution and the formation of cave, bedding plane, and joint conduits, and therefore constitute the primary significant aquifer system underlying the study area. Four major sets of joints, three of which are recognized over a large geographic area, are present on the ammunition plant. The regional joint sets present in the area trent roughly due north to N10E, N75W to N90W, and N40W to N45W. A local joint set, probably related to basement faulting in the area, trends approximately N70E. Many of the joints are unusually dilated, showing much greater separation than normal. The introduction of acidic wastewater to the Jenny Lind Run drainage basin greatly enhanced natural karst processes in the highly soluble Louisville and Jeffersonville Limestones, and rapidly eroded the Waldron Shale. Preexisting conduits were enlarged, and new conduits were created. Downstream from the intensely karsted Louisville and Jeffersonville, the wastewater flowed over the more resistant Laurel, Osgood, and Saluda. The lack of karst features in these units along Jenny Lind Run indicates that, other than surficial dissolution, wastewater effects were comparatively minor.

Preliminary engineering geology report of dam sites on the East Fork of the Muscatatuck River in Scott, Jennings, and Jefferson Counties, Indiana