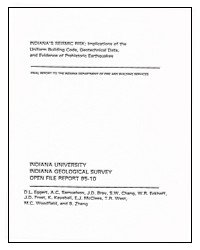 INTRODUCTION: The reason for studying soil-related earthquake hazards in Indiana urban areas was the growing recognition of Indiana's vulnerability to New Madrid earthquakes. The scientific community suspected that earthquakes. The scientific community suspected that earthquakes stronger than historic federal, state, and university researchers began mapping and collecting engineering data on earthquake-induced soil liquefaction features in southern and central Indiana. These paleoseismic studies document major prehistoric earthquakes in the Wabash Valley and southeastern Indiana; because of this research, the danger from earthquakes to Indiana is now recognized to be greater than it was thought to be in 1990. Investigations of earthquakes in California, Mexico, Japan, and other regions of the world, show how local soil conditions influence earthquake damage and human losses within the urban environment. The term "soil" is used in this report in the sense that engineers and building codes use it non-lithified materials that range in size from clay, silt, sand, and gravel. Post-distribution, and composition of these materials to variations in earthquake damage. In 1990 we began to study soils in southern and central Indiana urban areas to determine their response to future earthquake shaking. The Indiana Geological Survey was supported by the Indiana Department of Fire and Building Services to evaluate soil types as used in the Uniform Building Code seismic provisions. These deposits in Indiana range from absent to over 400 feet thick. In northern and north-central Indiana these deposits are usually thicker than in the south-central and southern Indiana, where they generally are less than 50 feet thick except in major flood plains. Most central and southern Indiana urban areas lie along the flood plains of major rivers where these deposits are thick. Therefore, the Clarksville, Columbus, Evansville, Indianapolis, Jasper, Jeffersonville, Lafayette, Muncie, New Albany, New Harmony, Terre Haute, and Vincennes urban regions have soils that exceed 50 feet in thickness, and in parts of Indianapolis and Lafayette they exceed 200 feet in thickness. These soils could amplify earthquake shaking or could be vulnerable to soil liquefaction failure. Thin soils in Bloomington and Muncie are not vulnerable to amplification and liquefaction during a major earthquake. The Indiana Department of Fire and Building Services (IDFBS) asked that we collect data from the following urban regions of central and southern Indiana: Indianapolis, Evansville, Bloomington, Columbus, Jasper, New Albany, Clarksville, Jeffersonville, Terre Haute, and Vincennes. During the course of our investigation we also obtained data from Muncie, Ne Harmony, and West Lafayette. Earlier maps and data collected as part of this study show that the composition and thickness of soils in the Indiana cities considered in this investigation are highly variable. Because of these the variations in soil conditions in southern and central Indiana cities, seismic design relevant to one site may not be applicable at another. The present Uniform Building Code provides guidance for builders to reduce damage from soil-related earthquake hazards. These provisions recognize four soil types in the determination of the Site Coefficients S Factor the higher the soil type, the higher the design requirements are for a given location. All four soil types are present in Indiana. These soil types are based on criteria so general that their use may not result in a reasonable margin of safety. A new classification has been proposed by a committee supported by the National Earthquake Hazards Reduction Program for adoption by the building code groups. The proposed soil classification categories are supported by data we have collected in Indiana and if adopted, will provide a significant increase in safety.

The seismicity of Indiana described by return periods of earthquake intensities

Seismic modeling in the (t,p) domain

Seismic velocities and synthetic seismogram computed from a continuous velocity log of a test well to the basement complex in Lawrence County, Indiana