Final report to the City of Evansville: shear-wave and earthquake hazard mapping of Evansville, Indiana (1994) 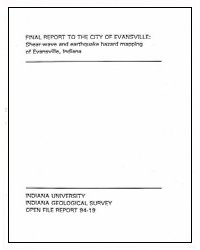 INTRODUCTION: Evansville has been the focus of our most intense study of soil velocity measures because of its vulnerability to earthquakes that originate in the New Madrid and Wabash Valley seismic zones. Thickness and particle size variations in the nonlithified unconsolidated sediments (soils) beneath the city determine the geographic distribution of damage from the future major earthquakes. Knowledge of shear-wave velocity, standard penetration testing (SPT), and cone penetrometer testing (CPT) of the unconsolidated sediment column is essential to determine soil period, amplification potential, liquefaction risk, and other site responses to earthquake shaking. Forty-four monitoring wells were installed to bedrock, penetrating from 23 to 140 ft of unconsolidated sediments, so that seismic velocities of soils could be measured in situ. Soil velocity testing was also completed on 21 private and public water monitoring wells. Sixty-four gamma ray logs were made on monitoring wells used in our study. More than 50 SPT's were made within Evansville and over six hundred SPT's records from public and private sources were collected. CPT's were conducted at 27 sites. This information was processed to evaluate how the cities "soils" will respond to earthquake shaking. From our downhole velocity measurements we were able to determine the dominant period at which soils would shake in response to an earthquake and the potential for the soil to amplify earthquake shaking. The data, particularly for SPT and CPT, were reviewed and evaluated to measure the risk of soil liquefaction within Evansville. Gamma logging is a technique that uses the natural radiation given off by sediments that surround a well to identify the particle size of the sediments. We applied this method to each well used in this report. Finer sediments, such as clay, generally emit more gamma radiation thus they sift the line to the right (higher gamma ray counts/sec.) And coarser sediments, sand and gravel, generally shift the line to the left (lower gamma ray counts/sec.). Soils in Evansville were deposited in a continuum of depositional settings from wind-blown loess (clayey silt), to lake deposits of clay and silt, and to stream deposits of silt, sand and gravel. Using the gamma logs of the monitoring wells, cross sections were made that show the lateral variations of soils within the city. These sectional views can be interpreted to show the underlying geological processes that determined the distribution of soils within the city, and they provide a framework for mapping seismic hazards within Evansville. Hopper (1985) prepared maps that suggested that some areas of Evansville would shake more severely than others and that some parts of the city are more vulnerable to soil liquefaction than others. Using the soil data we have collected in the Evansville region since 9189, we have made several new seismic hazard maps. These maps suggest that areas vulnerable to amplification of shaking or liquefaction are significantly different from those reported by Hopper. In response to our work, the United States Geological Survey has awarded two research contracts to build upon the information collected. These new studies will facilitate the development of the next generation of seismic hazard maps and maps that will help protect ground water.

The seismicity of Indiana described by return periods of earthquake intensities

Earthquakes in the Central United States 1699-2002

Geologic terrain map of the Indiana portion of the Newburgh quadrangle, Indiana-Kentucky