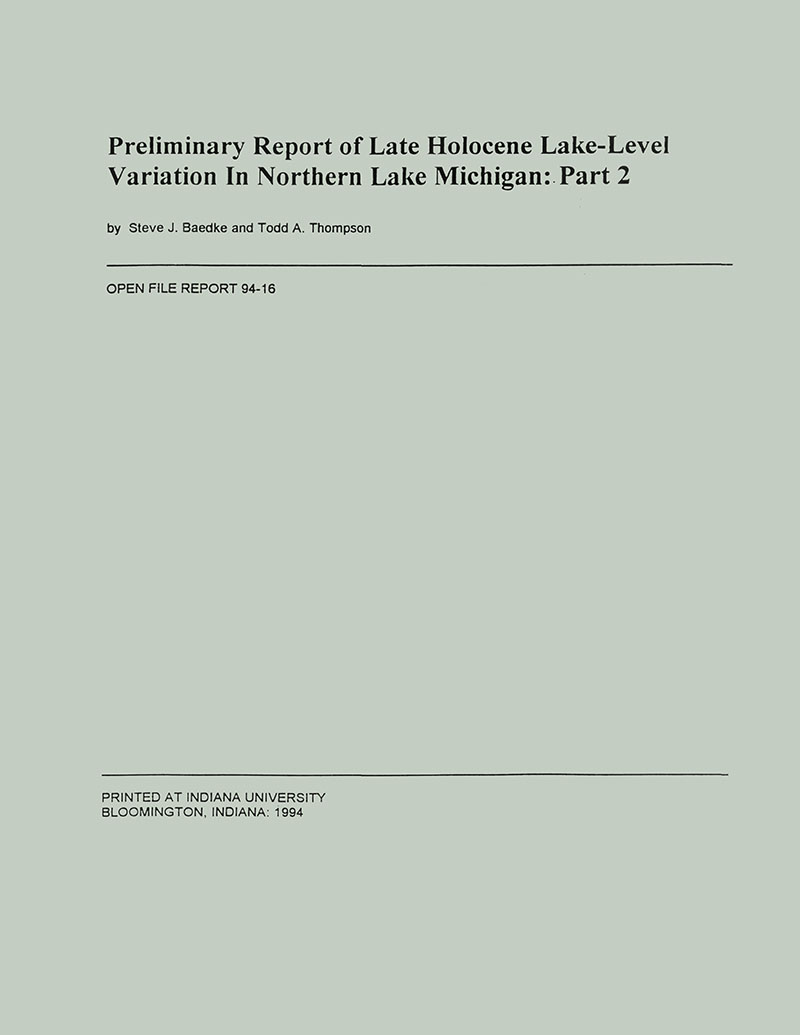 ABSTRACT: The internal architecture and timing of development were determined for 78 beach ridges within the Thompson and Manistique embayments southwest of Manistique, Michigan. The elevations of the foreshore sediments recovered in vibracores of the lakeward margin of each ride were used to determine the relative elevation of Lake Michigan when each ridge formed. To determine the age of the ridges and the timing of their development, 25 peat samples were dated from basal wetland sediments between ridges. A least squares regression was calculated through these dates to reduce scatter and to assign ages to unsampled wetlands. It is assumed in this study that the age of the base of the wetland is a minimum age for the ridge lakeward of it. Ridges were found to have formed during two periods, between 4,300 and 2,700 calendar years before present (B.P.), and between 1,800 and 1,000 B.P. Foreshore elevations show an overall lowering of relative lake level of 25 feet between 4,300 and 2,700 B.P. The Thompson embayment contains no ridges which formed between 2,700 and 1,800 B.P. Ridges during this period were either removed by high lake levels at some time between 1,800 or 2,700 B.P. or never formed. From 1,800 to 1,000 B.P. lake level dropped and additional 10 feet before beginning a long-term fall of 3 feet to current lake level. Between 4,300 and 1,000 B.P. individual beach ridges formed about every 30 to 35 years. Foreshore elevations indicate a well-defined grouping of four to five beach ridges approximately every 150 years. After 1,000 B.P. the shoreline of the Thompson embayment has straightened and accommodation space in the embayment has been removed, therefore it is unlikely that beach ridges after this point will be preserved. Although 3 beach ridges have formed immediately landward of the shore in the last 75 years, these are ephermeral features and will be removed fromt eh preserved record following the next high lake level event. Foreshore elevations recorded in the Thompson embayment are considerably higher than the long-term historical average of lake-level for Lake Michigan, suggesting that this embayment is far above the isostatic zero isoline for the Port Huron outlet for Lakes Michigan and Huron.