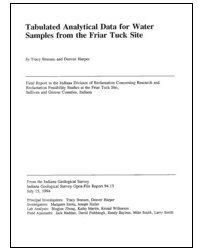 SUMMARY: Chemical data compiled in this report are the result of analyses of water samples collected during a period of five years from the Friar Tuck Site (FTS), located in Sullivan and Greene Counties, Indiana. These water-chemistry data were collected as part of research and reclamation feasibility studies that were conducted from September, 1987, through December, 1992. In addition to tabulated chemical data, analytical methods and quality-assurance and quality-control protocols that were used to determine the inorganic chemical composition of collected water samples are also described. Documentation of changes in sampling procedures and analytical methods made over the term of the project are included in the method descriptions. This report if divided into two parts. Part I contains detailed descriptions of all analytical methods and quality-control procedures that were used to generate the chemical data set. Part II contains tables of water-chemistry data subdivided into groups corresponding to specific areas or types of monitoring sties defined in previous annual reports to the Division of Reclamation (DOR) of the Indiana Department of Natural Resources (IDNR) and in the final report entitled : Direct Revegetation of Abandoned Coal-Refuse Deposits in Indiana: Its Effects on Hydrology, Chemistry, and Erosion by Harper and Olyphant (1993). Part I of this report helps define the limits of interpretations that can be used with the data from Part II.

Direct revegetation of abandoned coal-refuse deposits in Indiana: its effects on hydrology, chemistry, and erosion