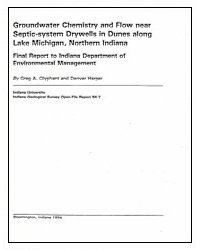 SUMMARY: Samples of groundwater in unsaturated and saturated sands below septic-system drywalls in Beverly Shores, Indiana, were acquired during both wet and dry seasons of an 18-month period. Data were collected at two residences: one was situated high on a dune crest, where the water table was more than 20 m below the ground, and the other was situated in a low-lying area adjacent to a wetland of the Indiana Dunes National Lakeshore. Plumes of contamination, represented by elevated chloride concentrations, existed in the unsaturated zone immediately below the drywalls. Contamination decreased with depth and disappeared before reaching the water table at the elevated site but extended into the water table aquifer at the low-lying site. At the low site, large, rapid responses of the water table occurred after major rainstorms, indicating rapid downward movement of infiltrated rainfall. At the elevated site, the water-table response, if any, was small and greatly delayed. At the low site, mounding of the water table beneath the domestic well created a local groundwater flow-gradient capable of causing movement of contamination at a rate of as much as 48 cm d-1 toward the contamination of the aquifer beneath the septic system drywall was not great enough to pose a health threat. An injection test at the low site showed that the water table rises rapidly in response to large outflows to the drywall. High concentrations of the chemical tracer (sodium bromide) appeared in the unsaturated zone soon after the injection; nine days later, the tracer appeared in the saturated zone, where its concentration was low. While the potential for aquifer contamination in the dunes area is great, our observations indicate that site-specific factors - such as topography, soil-moisture conditions, residential density, and rates and durations of effluent production - govern the degree of local contamination and the rates at which contaminants move vertically and laterally through the highly permeable dune sands.

Chemistry and movement of septic-tank absorption-field effluent in the dunes area, Lake and Porter Counties, Indiana