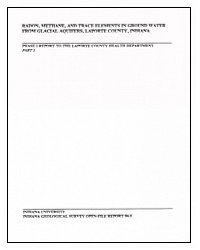 ABSTRACT: This project was initiated by the Indiana Geological Survey at the request of the LaPorte County Health Department due to concerns that the presence of arsenic, heavy metals, and other irons, repeatedly found at concentrations below the maximum containment levels in wells tested at or near the LaPorte County Recycling and Disposal Facility, might represent either landfill leakage or, alternatively, naturally occurring elevated concentrations of radon, methane, and certain ions in the aquifers in northwestern Indiana. Previous studies had indicated the presence of high concentrations of brownish-black, organic-rich, uraniferous shale fragments, or clasts, in certain glacial gravel aquifers and in other surface and near-surface deposits in northwestern Indiana. The preglacial source of the uraniferous shale clasts is a Devonian age bedrock unit named the Antrim Shale. The Antrim Shale locally underlies the younger glacial deposits throughout much of northern Indiana and adjacent areas of Michigan. This brownish-black shale unit is equivalent in part to the New Albany Shale (Devonian and Mississippian) of southern Indiana. The New Albany is known to have high concentrations of uranium and organic carbon and, in places, relatively high concentrations of metals. High concentrations of uranium, organic carbon, and certain metals in geologic materials are cause for concern. First, radon (222Rn) is produced from the radioactive decay of radium (226Rn), which is, a daughter product of the decay of uranium (238U). Secondly, high concentrations of certain metals are known to cause health problems. And finally, the presence of large amounts of organic carbon in unconsolidated and bedrock deposits can result in the accumulation of methane, a potentially explosive gas. Because of the similarities of the brownish-black shale of the Antrim Shale in the southern part of the state, the potential exists for the occurrence of high concentrations of radon, methane, and certain metals in the ground water of glacial aquifers that contain clasts of brownish-black shale. To determine the natural concentrations of radon, methane, and selected metals occurring in hte glacial aquifers of LaPorte County, water samples were analyzed from 20 domestic wells located within distinct geologically defined settings. Preliminary results indicate that the shale content of aquifers has low-level influences on the water chemistry of the wells sampled; however, the chemical attributes of the shale do not result in the sampled waters exceeding the drinking water standard maximum containment levels established by the U.S. Environmental Protection Agency for public water supplies. Only one sample had concentrations of radon that exceeded the federal drinking-water primary standard. The concentrations of methane in several wells were high. At present, no federal standards for methane levels in drinking water from public water exist. High methane levels in well water are simply regarded as a safety problem.

This item is no longer available. Please contact the Indiana Geological and Water Survey Publication Sales Office for more information. Many IGWS publications are available through local libraries.