Assessment of the 3,000 ppm and 10,000 ppm total dissolved solids boundaries in the Mississippian and Pennsylvanian aquifers of southwestern Indiana (1993) 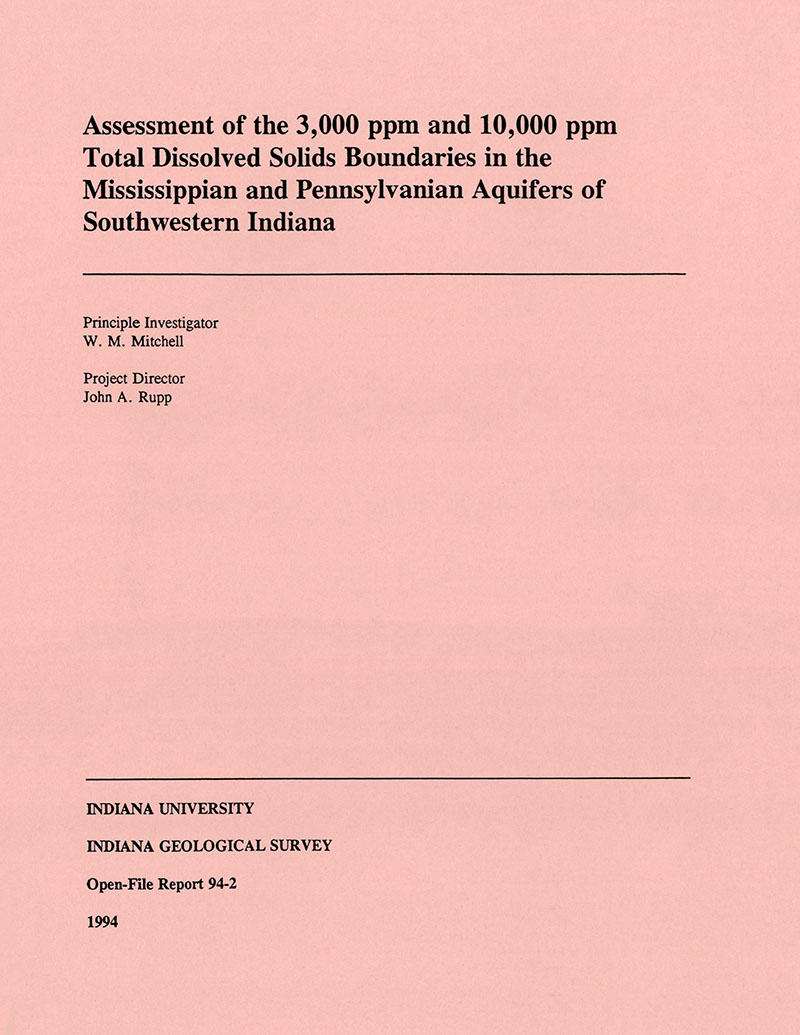 ABSTRACT: The Indiana Geological Survey (IGS), in cooperation with the Indiana Department of Natural Resources' Division of Oil and Gas, conducted a study of Mississippian and Pennsylvanian aquifers in southwestern Indiana to identify and depict the 3,000 and 10,000 ppm total dissolved solids (TDS) boundaries. Those boundaries, particularly the 10,000 ppm TDS level, are used to define the limits of aquifers denoted as Underground Sources of Drinking Water (USDW); under current federal regulations those aquifers are subject to protective measures to prevent contamination. The Indiana Division of Oil and Gas, as the primary state agency concerned with ensuring that USDWs are protected from contamination by the activity of the petroleum industry, has an ongoing interest to develop a regionally appropriate methodology. These data will facilitate the activity of the Division of Oil and Gas in the permitting and monitoring of various types of injection wells involved in secondary recovery and the subsurface disposal of oil field waters (Class II wells). Maps that show the structural configuration of the critical TDS boundaries within the petroleum-producing counties of southwestern Indiana, therefore, are highly useful. The TDS values for individual formations were obtained from two sources: actual brine samples, and from calculations utilizing resistivity and porosity readings from geophysical surveys that were run in petroleum industry wells. The data provided by over 2,500 oil and gas industry wells and approximately 10,000 individual-formation TDS calculations were used to make isosalinity maps. Maps depicting the elevations of the 3,000 and 10,000 ppm TDS boundaries were generated using the interpolated data from the log calculations and from brine samples. Five boreholes ranging from 449 ft to 609 ft were drilled and cored to calibrate the log evaluation techniques used. Each corehole was logged with a resistivity tool and a neutron/density device, which providing the same type of borehole evaluation data that was derived from petroleum industry wells used for calculation. TDS calculations were made from the logs on selected formations penetrated by the coreholes. The same zones were isolated by inflatable straddle packers, and actual samples of the formation waters were brought to the surface by a compressed-air operated pump. The water samples from 13 zones were analyzed using for TDS levels two different lab techniques and compared to log-derived calculated TDS values. None of the zones tested exceeded measured TDS levels of 2,000 ppm. The methodology was designed for saline fluids; the relatively low TDS levels and the presence of gas are though to be responsible for the reduced correlation found in the remaining fifty percent. The study demonstrated that TDS values derived from geophysical log can be used to predict salinity trends with reasonable reliability; however, exact TDS concentrations cannot be as reliably determined from log-derived data alone when formation fluids having salinities less than 5,000 ppm are present. It was also demonstrated that the 3,000 and 10,000 TDS ppm surfaces form generally basinward dipping surfaces that are much more irregular than anticipated. The 3,000 and 10,000 TDS surfaces occur in southwestern Indiana at greater depths than expected. Numerous salinity anomalies and salinity reversals or inversions were observed to exist within the study are. Those salinity anomalies and inversions can indicate several conditions, including the upwelling of deep fluids, faulting, and/or the circulation of more shallow subsurface fluids, and perhaps even the mixing of surface waters and the subsequent introduction into deep aquifers that normally would contain fluids of higher TDS levels.

Assessment of the 3,000 ppm and 10,000 ppm total dissolved solids boundaries in Mississippian and Pennsylvanian bedrock aquifers of southwestern Indiana

Rocks associated with the Mississippian-Pennsylvanian unconformity in southwestern Indiana

Assessment of levels of lead, arsenic, and other trace elements in the ground water from bedrock aquifers in southern Indiana

Map showing structure on top of the Mississippian unconformity at NSWC, Crane, Indiana