Direct revegetation of abandoned coal-refuse deposits in Indiana: its effects on hydrology, chemistry, and erosion (1993) 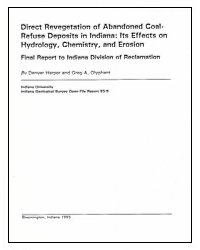 SUMMARY: Reclamation of abandoned deposits of fine-grained refuse (tailings) at the Friar Tuck Site (F.T.S.) was readily achieved by using methods of direct revegetation. On weathered, undisturbed deposits of coarse-grained refuse (gob)(where soil pH was less than 3.8 and pyrite concentrations were less than 0.84 percent, by weight), trial plots and instrumented watersheds were established on uplands and steep slopes to test the efficacy of direct revegetation on such deposits. The amendments that were applied to the gob deposits by using conventional farming equipment and methods included agricultural limestone (as much as 110 tons per acre), fertilizer, seed, straw mulch, and turkey manure. The limestone was incorporated to various depths. Stabilization techniques that were employed included large checkdams that were emplaced by end-dumping of riprap (5 tons to 185 tons) in upland gullies, and erosion netting and water bars that were installed by hand on steep slopes. Sericia lespedeza, Kentucky 31 fescue, bristly locust, and black locust exhibited good growth. The initial growth of grasses was promoted by incorporation of limestone into the soil by discing, but revegetation was successful by the third growing season even where incorporation was not practiced. The moisture-holding capacity of weathered gob, which is derived primarily from shale, is like that of a loam soil. Discing and the establishment of vegetation caused an increase of infiltration during rainstorms. This was associated with a reduction of the quantity of water that was shed as overland runoff, whose chemistry was changed from unfavorable (350 mg L-1 acidity) to favorable (67 mg L-1 alkalinity) by reaction with the agricultural limestone. The increased infiltration also resulted in net surpluses of moisture in the rooting zone of plants during the critical drying season of mid-summer, when drought stress is typically at its maximum. This, when the barren dark crusty surface of the gob, which in its storm runoff and of evaporation by the absorption of solar radiation, has been transformed through discing and application of lime and mulch, soil moisture remains abundant throughout the drying season, and the drought stress ceases to be a limiting factor in the humid-temperature climate of southern Indiana. Soil pH increased (from less than 3.0 to more than 4.2) and alkalinity appeared (more than 100 mg L-1) in the uppermost 6 inches. Alkalinity did not appear in pore water at a depth of 1.7 feet, but there was a reduction of acidity. The increased infiltration that results from direct revegetation may cause temporary, seasonal increases in the acidity of seeps from the base of the gob deposit. Such seeps are common at the bases of reclaimed gob deposits, and no practical (i.e., reasonable cost) method of reclamation yet devised has been capable of completely and permanently eliminating all acidic drainage from saturated zones of refuse deposits. The large riprap checkdams captured much sediment during the first 18 months of their existence, and the caputured sediment supported the vigorous growth of volunteer species; sediment accumulation ceased when erosion from the contributing watersheds was arrested by revegetation. Increased infiltration and the establishment of vegetation prevented the transport of 29 kg m-2 of acid-generating sediment from upland areas during a two-year period and the transport of the 19 kg m-2 from steep slopes during a four-month period. When supplemented with simple techniques of sediment control, direct revegetation is a feasible method for reclaiming abandoned weathered gob deposits in Indiana. Even steep slopes (up to 25ø) can be successfully revegetated. The principal advantage of such an approach is its low cost: elaborate engineering designs and large earth-moving equipment are unnecessary, reclamation can be achieved using conventional farming equipment, and there is minimal disturbance of surrounding areas. Work may be required for several successive growing seasons, in order to insure the establishment of vegetation across the entire area to be reclaimed, and areas with steep slopes (which generally constitute a small percentage of the whole) may require some intensive hand-labor. Long-term maintenance of the reclaimed areas should be minimal, however, because the landscape is left in a relatively natural condition, compared with that produced by conventional reclamation methods, which typically involve the creation of artificial drainage landscape (such as gullies or scattered barren patches) may not be aesthetically pleasing to some people. But while aesthetic considerations are important, they should be secondary to considerations of cost and efficacy in remote, rural areas dedicated to wildlife habitat. As is the case with all reclamation projects, the greatest emphasis at F.T.S. was placed on establishing vegetation on barren areas and arresting the adverse effects of storms. When successful, such approaches eliminate erosion and siltation, but less than 50 percent (and perhaps as little as 10 percent) of the total acidic drainage from these sites may be eliminated, particularly in areas underlain by shallow flooded underground mines. Development of strategies for total elimination of acidic drainage will require a broader view and longer term perspective on hydrologic conditions in such complexly distributed areas and greater emphasis on long-term, passive treatment of both recharge and discharge.

The quality of Indiana's coal resources

An analysis of selected Indiana coals by the particle count method