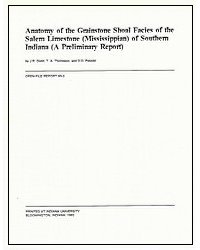 ABSTRACT: In 1990 M.A. Brown described the middle Mississippian (Valmeyeran) Salem Limestone exposed on the eastern side of the Illinois basin as consisting of a massive grainstone shoal facies behind which developed a sand flat, an open lagoon, and a restricted lagoon facies. The massive shoal facies consists of a series of shoals separated by intershoal areas that connected the lagoon behind the shoal to the open marine environment. Smaller intrashoal channels provided limited exchange between lagoon and open ocean. We have made detailed studies of sedimentary structures and petrography of the shoal facies in three settings: in the shoal proper, in an intrashoal channel, and in an intershoal area. The shoal and intrashoal channel facies consist of tabular-planar and trough cross-stratified beds of grainstone containing echinoderm and fenestrate bryozoan grains as their primary constituents. Ooids increase in abundance toward the top of the section in the intershoal area and intrashoal channel but are not a major constituent except in parts of the intershoal facies. Prominent hardgrounds that have up to 1 m of erosional relief occur in two of the sections. Primary sedimentary features of the shoal facies were produced predominantly by tidal currents and storm reworking of carbonate grains produced in situ and perhaps in part washed in from surrounding environments. Hardgrounds were produced at times of reduced sedimentation rate or possibly during brief periods of subareal exposure. Despite the apparent uniformity of composition of the shoal, porosity and especially permeability varies over a wide range, suggesting a range of cementation patterns within the shoal. Most of the cement in the shoal consists of syntaxial overgrowths on echinoderm grains. Porosity and permeability are greatest in portions of the shoal complex that have not been extensively mechanically and solution packed. Formation of some early meteoric cement probably was the main factor inhibiting compaction. Thick micrite envelopes and oolitic coatings around echinoderms inhibited development of syntaxial cement preventing occlusion of all pore space by later cementation. However, some portions of the intershoal facies that contain a high percentage of ooids have reduced porosity and permeability due to crushing of ooids, producing micrite that clogged the pores. A small amount of the cement in Salem grainstones formed in the marine environment. A larger portion formed by solution of aragonitic grains and reprecipitation as calcite cement. The major portion of the cement probably came from pressure solution, both between grains and along stylolites.