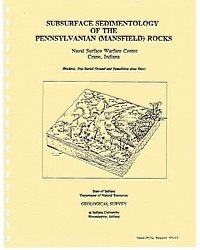 INTRODUCTION: This study was conducted to better understand the geology of the Pennsylvanian age rocks beneath the Rockeye, Dye Burial Ground (DBG) and Demolition (Demo) area sites at the Naval Surface Warfare Center (NSWC), Crane, Indiana. The Pennsylvanian age rocks at Crane are very complex both sedimentologically and stratigraphically. A recent program of closely spaced coreholes has provided an excellent database for detailed subsurface analyses. These analyses have provided important information regarding not only the sedimentology and stratigraphy, but also the size, shape and quality of the potential aquifer bodies that lie beneath these sites. Critical to the assessment of the potential reservoir rocks underlying these sites is classifying the rocks encountered in each borehole into appropriate sedimentological facies. Understanding the depositional system and component facies of each depositional environment will allow for accurate prediction of the geometry and extent of reservoirs (aquifers) and confining units underlying the sites. This study shows the location of the three sites from which Pennsylvanian cores examined for this report were previously taken by the U.S. Army Corps of Engineers, along with the location of the seven new coreholes taken by the Indiana Geological Survey (IGS). Altogether more than 5,100 feet of cores were examined for this report. The bulk of the cores (2,809 feet) is from the Rockeye site, and therefore a very detailed understanding of the Pennsylvanian geology beneath this site has emerged. At the Dye Burial Ground, a total of 808 feet of Pennsylvanian cores from 17 coreholes was available for study. Generally speaking, the geology at the DBG is less complicated than at Rockeye. Therefore, although fewer cores are available, a good understanding of the sedimentology at the DBG is possible. Of the three sites, the Demolition site is the least well understood. Only four cores totaling 396 feet are available for study. Furthermore, the sedimentology at this site is relatively complicated. However, based on the limited available data, some important inferences about the potential reservoir bodies at this site can be made. Finally, the seven new cores (the IGS cores) taken between the three sites have provided valuable information about the regional stratigraphic relationships of the Pennsylvanian rocks at Crane, and how the aquifer systems defined at the three sites relate to each other.

Outcrop features of the Mansfield Formation in southwestern Indiana