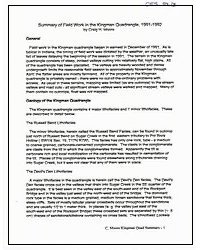 GENERAL: Field work in the Kingman quadrangle began in earnest in December of 1991. As is typical in Indiana, the timing of field work was dictated by the weather, an unusually late fall of leaves delaying the beginning of the season in 1991. The terrain in the Kingman quadrangle consists of steep, incised valleys cutting into relatively flat, high plains. All of the quadrangle has been glaciated. The valleys are heavily wooded and dense undergrowth limits the reasonable field season to approximately November through April; the flatter areas are mostly farmland. All of hte property in the Kingman quadrangle is privately owned - there were no out-of-the-ordinary problems with access. As usual in these terrains, mapping was limited (as are outcrops) to the stream valleys and road cuts - all significant stream valleys were walked and mapped. Many of them contain no outcrops, float was not mapped.