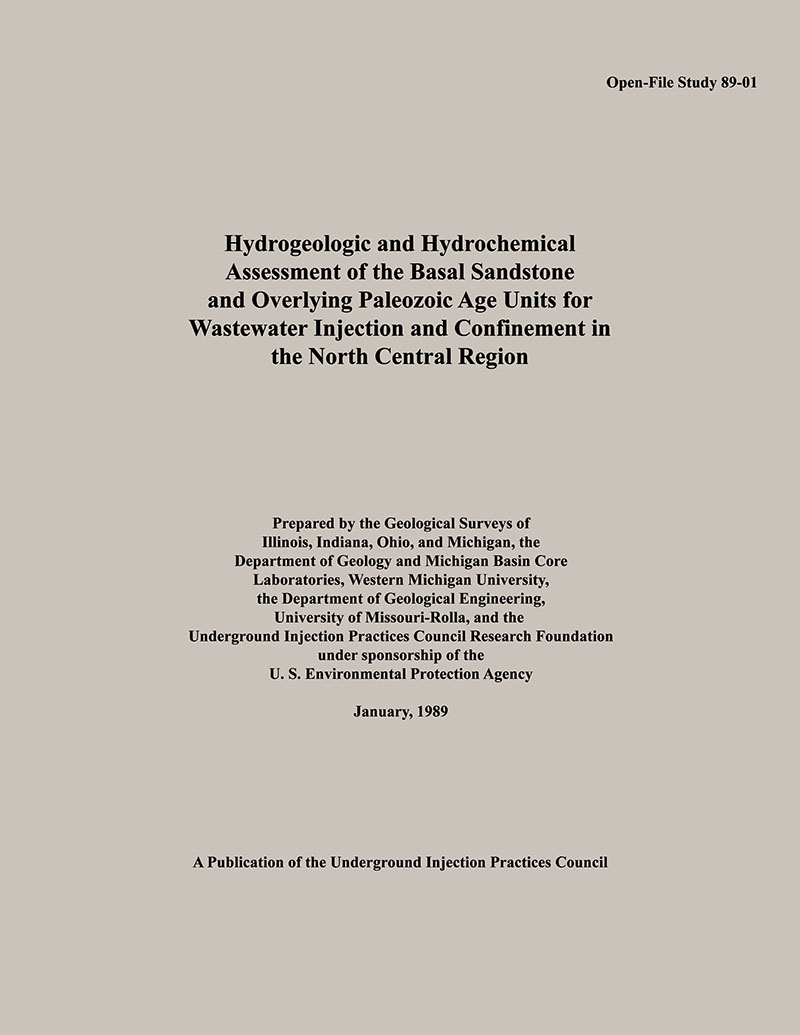 ABSTRACT: Geologic and engineering information was collected on the Cambrian Mount Simon Sandstone (basal sandstone) and overlying confining strata from the North Central Region of the United States. State agencies of Illinois, Ohio, Indiana, Michigan and the Department of Geology and Michigan Basin Core Laboratories of Western Michigan University supplied basic data for the study from their respective states. These data were tehn collated and analyzed, on a regional basis, by the University of Missouri-Rolla. The broad objective of the study was to evaluate the suitability of the basal sandstone as a receptor for injected wastewaters in the North Central Region. Major data elements that were collected and analyzed included: the elevation of the top of the basal sandstone; interval isopach and sandstone isolith of the basal sandstone; porosity and permeability of the basal sandstone; thickness and lithology of the immediate confining unit; porosity, permeability, thickness and lithology of the total confining interval; water chemistry of the basal sandstone and superjacent permeable units; potentiometric data; siesmic risk data and hydraulic fracture gradients. The most satisfactory reservoir conditions exist where the permeable thickness, porosity and permeability of the basal sandstone are greatest. Hydraulic confinement is the best where the immediate confining layer is thick and contains appreciable shale. The optimum total confinement occurs where a thick section of alternating permeable and impermeable rocks exists between the immediate confining layer and the base of the Underground Source of Drinking Water (USDW). In Illinois, the basal sandstone contains fresh water in the northern portion of the State. It is thin or absent in southwest Illinois and is very deep and has a complex structure in the southeast. These regions should be considered as poor prospects for wastewater injection. In the central part of the State, the basal sandstone is thick and porous, confinement is provided by the Eau Claire Formation and regional flow is away from the fresh-water bearing locations. Thus, conditions in central Illinois are generally favorable for injection of wastewater into the basal sandstone. Except for the extreme northwestern and southern portions of the State, Indiana has generally favorable geologic conditions for injection. The immediate confining layer is absent just south of Lake Michigan in portions of Lake and Porter counties. In that area, the upper basal sandstone contains water with a total dissolved solids content of less than 10,000 mg/ throughout the North Central Region. Western Ohio has generally favorable conditions for injection. In eastern Ohio, the basal sandstone is thin, has relatively low porosity and permeability and is deep and the immediate confining layer is largely composed of carbonate. Only along the southern margin of the Michigan basin would conditions for injection be economically and technically favorable. The basal sandstone is deeply buried in central Michigan. It is thin and immediately overlain by sandstone and carbonate in the northern portion of the Lower Peninsula of Michigan. Correlations of the Mt. Simon Sandstone into the Northern Peninsula of Michigan are uncertain. In any case, the shallow depths of lower Paleozoic age rocks make them unacceptable as host formations for wastewater disposal in the Northern Peninsula. Water flow in the basal sandstone is believed to be from northern Illinios toward the Mississippi and Ohio Rivers at an average of approximately 9 x 10-5 miles (0.5 feet) per year. An exception to this pattern is where flow has been induced, by pumping, toward the vicinity of Chicago. Flow velocities would be expected to be greatest where flow converges toward the vicinity Chicago. Flow velocities would be expected to be greatest where flow converges toward the Chicago area pumping centers. Available data would indicate that flow velocities in the deep basin areas are so low that determination of velocity and direction of flow is difficult and uncertain. Extreme southern Illinios and southwestern Indiana are areas of potential major earthquake damage. Moderate damage potential is projected for the southern one-third of Illinois, the southern half of Indiana and southwestern Ohio. The remainder of the study area is classified as having potential for minor earthquake damage. The implication of these damage-potential classifications for subsurface injection are not known but they do provide an indication of the relative level of concern with regard to any earthquake related contingency plans or facilities that might be required. Of more direct concern is the potential for triggering of earthquakes by injection. Areas where such earthquake stimulation appears to be a significant possibility are extreme southern Illinois, southwestern Indiana and northeastern Ohio. Since the southern Illinois and southwestern Indiana areas are also otherwise unfavorable for injection, there is little practical possibility of any interest in siting injection facilities there. Injection wells have been operated in northeastern Ohio and recent (1986-1987) earthquakes have occurred in that area. While it is not certain that injection triggered those earthquakes, it does seem that geologic conditions are conducive to such triggering, which then becomes a significant siting consideration.

Prepared by the Geological Surveys of Illinois, Indiana, Ohio, and Michigan, the Department of Geology and Michigan Basin Core Laboratories, Western Michigan University, the Department of Geological Engineering, University Missouri-Rolla, and the Underground Injection Practices Council Research Foundation under sponsorship of the U.S. Environmental Protection Agency. With contributions by J.A. Rupp and D. Pennington. 1989.

Direct revegetation of abandoned coal-refuse deposits in Indiana: its effects on hydrology, chemistry, and erosion