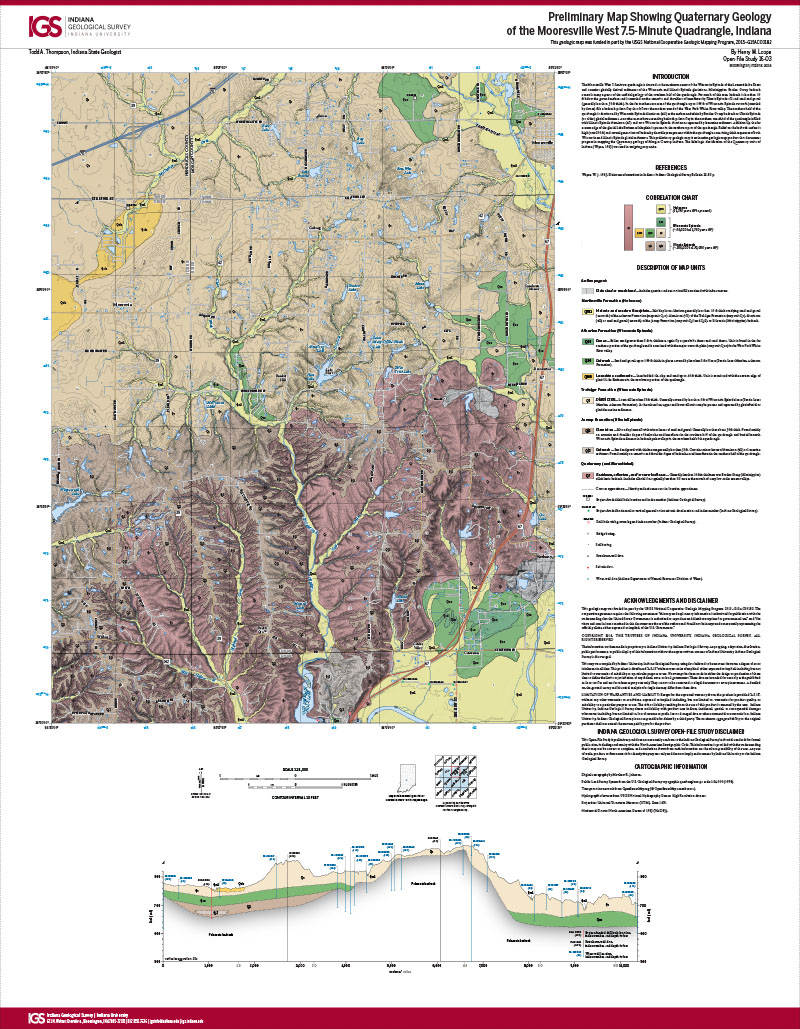 The Mooresville West 7.5-minute quadrangle is situated at the maximum extent of the Wisconsin Episode of the Laurentide Ice Sheet and contains glacially derived sediments of the Wisconsin and Illinois Episode glaciations. Mississippian Borden Group bedrock controls many aspects of the surficial geology of the southern half of the quadrangle. For much of this area, bedrock is less than 10 ft below the ground surface and is mantled on the summits and shoulders of interfluves by Illinois Episode till and sand and gravel (generally less than 30 ft thick). In the far southeastern area of the quadrangle, up to 100 ft of Wisconsin Episode outwash (mantled by dunes) fills a bedrock paleovalley that follows the modern trend of the West Fork White River valley. The northern half of the quadrangle is dominated by Wisconsin Episode diamicton (till) at the surface underlain by Borden Group bedrock or Illinois Episode (or older) glacial sediments. A northeast-southwest-trending bedrock paleovalley in the northern one-third of the quadrangle is filled with Illinois Episode diamicton (till) and two Wisconsin Episode diamictons separated by lacustrine sediment. Additionally, the far eastern edge of the glacial Lake Eminence lake plain is present in the northwest part of the quadrangle. Relief on the bedrock surface is high (over 200 ft) and several generations of bedrock paleovalleys are present within the quadrangle, containing thick sequences of both Wisconsin and Illinois Episode glacial sediments. This preliminary geologic map is an interim geologic map product that documents progress in mapping the Quaternary geology of Morgan County, Indiana. The lithologic classification of the Quaternary units of Indiana (Wayne, 1963) was used in assigning map units.