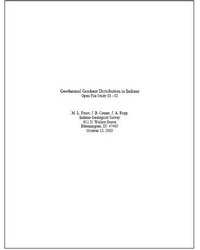 INTRODUCTION: During the late 1960s and continuing through the early 1970s, the American Association of Petroleum Geologists (AAPG) sponsored a project entitled “Geothermal Survey of North America.” The aim of this project was to collect temperature information from deep boreholes (predominantly oil and gas wells) in order to calculate the geothermal gradients in the uppermost part of the crust of North America. A portion of that national project targeted the states of Indiana and Illinois and resulted in the production of an unpublished map showing the distribution of the gradients in this region. In the AAPG project, maximum recorded values for bottom-hole temperatures were used to calculate the gradient throughout the region. A wide variety of geophysical well logs were used, most of which had a temperature value reported for the bottom of the hole and for the surface. Numerous questions remain as to the compilers’ use of these data. Consideration of cooling or heating by the drilling process and any systematic processing of the reported values relative to those considerations is unknown. The map produced for Illinois and Indiana contained more than 600 different data points, however, only about one-third were located in Indiana. The large number of data points outside Indiana undoubtedly exerted a significant influence on how the gradients were contoured for Indiana. Additionally, some “corrected” or inferred bottom-hole temperatures were used owing to a lack of measured down-hole temperature data for Indiana (Kehle and others, 1971; Keller, pers. comm., 2003). By basing geothermal gradient calculations on modified bottom-hole temperatures, the calculated gradients in some parts of the state may not be accurate. The purpose of this project was to collect new data and generate a new geothermal gradient map of the state, thus providing a more accurate representation of the geothermal gradients in Indiana.

Coal in Indiana: a geologic overview