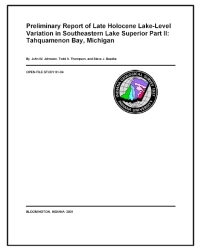 ABSTRACT:The internal architecture and age of development of 71 beach ridges in the Tahquamenon Bay embayment, located along the southeastern shore of Lake Superior on the Upper Peninsula of Michigan, were studied to generate a late Holocene relative lake-level curve for Lake Superior. The record from this embayment is important because Tahquamenon Bay is located near the outlet for Lake Superior and may have experienced similar vertical movement (isostatic uplift) rates as the outlet. The lakeward side of beach ridges were cored to obtain the elevation of basal foreshore deposits, which record the elevation of the lake when each beach ridge formed. Basal wetland sediments were collected from swales between ridges and radiocarbon dated to determine the age of the next lakeward adjacent beach ridge. Regression analysis of the calibrated dates was used to approximate the age of the beach ridges. Elevation data and age data were used to construct a relative lake-level curve for Tahquamenon Bay. Beach ridges in the Tahquamenon Bay embayment formed between about 4,300 and 2,000 calendar years before 1950 (cal. yrs. B.P.). The average timing for beach-ridge development of one ridge in the Tahquamenon Bay strandplain is 31 ± 3.7 years. Groupings of four to six beach ridges indicate longer-term fluctuations in lake levels. Basal foreshore elevations indicate relative lake levels dropped rapidly (almost 5 m) from about 4,100 to 3,800 cal. yrs. B.P., lowered gradually (approximately 7 m) from about 3,800 to 2,300 cal. yrs. B.P., and remained fairly constant from about 2,300 to 2,000 cal. yrs. B.P. The rapid drop is associated with a drop in water level from the Nipissing II high water-level phase, and the change from a gradual fall to a fairly constant slope is associated with an outlet change from Port Huron, Michigan, to Sault Ste. Marie, Michigan. Grain-size and foreshore thickness trends may be attributed to variations in sediment source or littoral currents or wave climate or outlet location or outflow characteristics or vertical movement between the study area and the outlet or a combination of these.