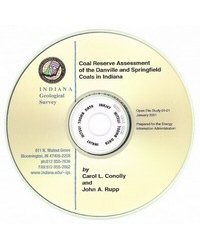 Also contains a CD with ArcInfo coverages and associated metadata and Access database of resource information.

Map showing the thickness and mined out areas of the Danville Coal Member in Gibson, Pike, Posey, Warrick, and Vanderburgh Counties, Indiana

Map showing the elevation relative to sea level of the Springfield Coal Member in Sullivan, Knox, and portions of Clay, Greene, and Daviess Counties, Indiana