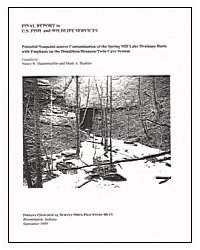 ABSTRACT: The Spring Mill Lake drainage basin is located in Lawrence and Orange Counties in south central Indiana. The basin is developed on the Mitchell Plateau physiographic section, which is a low karstic limestone plateau dissected by entrenched major stream systems. This plateau is an area of relatively low relief and is developed on a moderately thick sequence of Mississippian carbonate rocks. Streams discharging from Donaldson/Twin, Hamer, Wind, Whistling, and Rubble Springs feed Spring Mill Lake. Nitrogen enrichment and siltation of the cave systems and the lake have been recognized as problems in the area, and past complications indicated the excessive presence of pesticides. Two highways, a railroad line, and numerous county roads lie within the drainage area of Spring Mill Lake, so that chemical spills and roadway de-icing substances may quickly and drastically degrade the quality of ground water and the water that reaches the lake. Failed or inadequate septic systems in an area of expanding population and agricultural practices affect water quality, and erosion from tillage and construction have the potential to increase sedimentation rates in the lake. In order to determine best land management practices and to recognize danger to the ground water and the lake from chemical spills and highway construction, it is necessary to precisely define the drainage area of Spring Mill Lake. During a more comprehensive project supported by the Indiana Department of Environmental Management, the boundaries of the Spring Mill Lake drainage basin and its six subbasins were better defined using organic dyes at very low concentrations. This current project focuses on the Donaldson/Bronson/Twin (Shawnee) Cave System. The work, conducted by the personnel of the Indiana Geological Survey and the Department of Geological Sciences at Indiana University, was funded in part by the U.S. Fish and Wildlife Services. Some of the information from the comprehensive project is included in the current report. Dye tracing indicates that the Donaldson Cave System, which is fed by a sinking stream, Mosquito Creek, drains the southeastern part of the Spring Mill Lake watershed. The Hamer Cave System drains the southwestern part of the watershed. The Donaldson sub-watershed drains 42 percent of the total Spring Mill Lake watershed; the Hamer sub-watershed drains 39 percent of the total watershed. To formulate a plan to provide information on best management practices to landowners, the waters flowing from the springs were analyzed to determine any chemical and biologic contaminants and the volume of sediments entering the lake were measured. Variations in water quality were noted between low-flow regimes and storm events and with seasonal events such as tillage, application of fertilizers to cropland and of pesticides to highway and railroad right of way as well as to cropland. During the comprehensive project, multiple data collecting sites were selected within the six subbasins of the Spring Mill Lake watershed. These subbasins of the watershed, including those of Donaldson/Twin, Hamer, Wind, Whistling, and Rubble Springs, were monitored during low flow to establish background data. The monitoring included measurement of precipitation, stream flow, turbidity, sediment volume, specific conductance, temperature, pH, coliform bacteria (Escherichia coli), pesticides, major cations and anions, trace elements, and nitrogen isotopes. * Samples from the Donaldson Cave System and the confluence of Hamer/Whistling/Wind Cave Systems were collected and analyzed during one storm event prior to the seasonal application of pesticides. Quarterly water samples were collected at 8 monitoring sites, including Donaldson and Upper Twin Cave Springs. The quarterly samples were analyzed for Escherichia coli and pesticide content. The E. coli levels from the springs within the park were variable. From August 1998 to May 2000, the levels in water samples from the Upper Twin Cave Spring varied from 27 to 276 most probable number (MPN) per 100 mL and the levels in samples from Donaldson Cave Spring varied from 53 to 166 MPN per mL. The level of E. coli for whole body contact recreation is 235 MPN per 100 mL. None of the samples contained pesticide concentrations above the minimum levels for detection. Major ion chemistry and trace element analyses were conducted on water samples collected from the monitoring sites in August of 1998 and 1999 to represent seasonal low-flow conditions. Samples were also collected during a February 2000 storm event to establish high-flow conditions. The results of the storm-event sampling indicate that there is very little change in the ratio of ions from low to high flow. Storm events merely dilute the total concentration. The waters are calcium bicarbonate waters typical of karst regions in Indiana. The concentrations of major cation and anions and trace metals in the samples do not exceed the EPA drinking water standards. Nitrate concentrations in water samples from Donaldson Cave Spring were 11.0 mg/L in August 1998 and 32.8 mg/L in August 1999. The nitrate concentration in a water sample from Upper Twin Cave was 7.8 mg/L in August 1999. Nitrate concentrations in the water samples collected from Donaldson Cave during the storm event in February 2000 ranged from a low of 5.45 mg/L immediately after the beginning of the storm on February 18 to a high of 14.13 mg/L on February 22. Nitrate concentrations in background samples collected from the spring on January 10th and 20th 2000 were 13.77 and 13.14 mg/L, respectively. Nitrogen isotopes of the storm-event samples range from -0.15 to +2.83 per mil (%º). Nitrogen isotopes concentrations in background samples collected from Donaldson Cave on January 10th and 20th 2000 were 3.00 and 3.14%º respectively. These concentrations are well below the range of nitrate (+9.6 to 17.6%º) produced from animal waste and indicate possible inorganic source. Imagery and digital topography were used to illustrate land use and to estimate input of chemicals by subbasins. Farmland-use data were used to classify land use on a farm-by-farm basis. Up to nearly 60 percent of the land use should be characterized by low pesticide application. In order to maintain water quality within the area, it would be advantageous to continue programs such as the CRP and to limit residential/urban construction and the installation of septic systems.