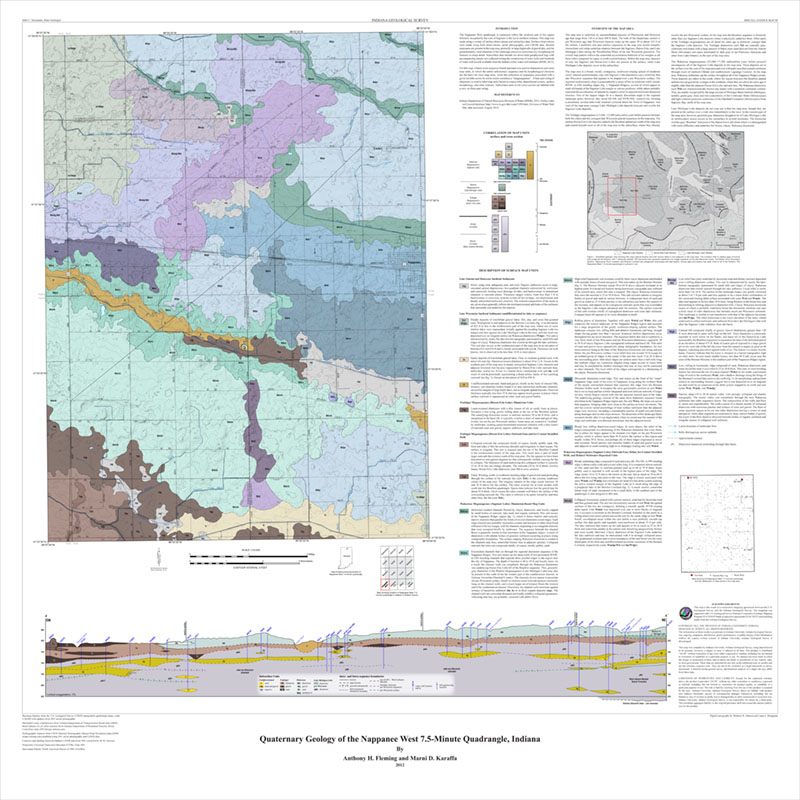 The Nappanee West quadrangle provides geologic information about the unconsolidated deposits of Pleistocene and Holocene age in north central Indiana. Sediment thickness ranges from 150 to at least 400 ft thick. The bulk of the Quaternary section is pre-Wisconsin age; late Wisconsin deposits make up the upper 30 to about 125 ft. Landforms and near-surface sequences in the map area record complex interactions and onlap-underlap relations between the Saginaw, Huron-Erie, and Lake Michigan Lobes during the Woodfordian Phase of the late Wisconsin glaciation. The overall map pattern reflects the somewhat asynchronous behavior of ice margins as all three lobes competed for space in north-central Indiana. Within the map area, deposits of only the Saginaw and Huron-Erie Lobes are present at the surface, while Lake Michigan Lobe deposits occur in the subsurface. This map was made using a variety of surface observations and subsurface data. Surface observations were made using field observations, aerial photography, and LiDAR data. Several exposures are present in the map area, primarily in large highwalls of gravel pits, and the predominantly rural character of the landscape preserves numerous key morphological features in sharp detail.

Geologic map of the 1° x 2° Vincennes quadrangle and parts of adjoining quadrangle, Indiana and Illinois