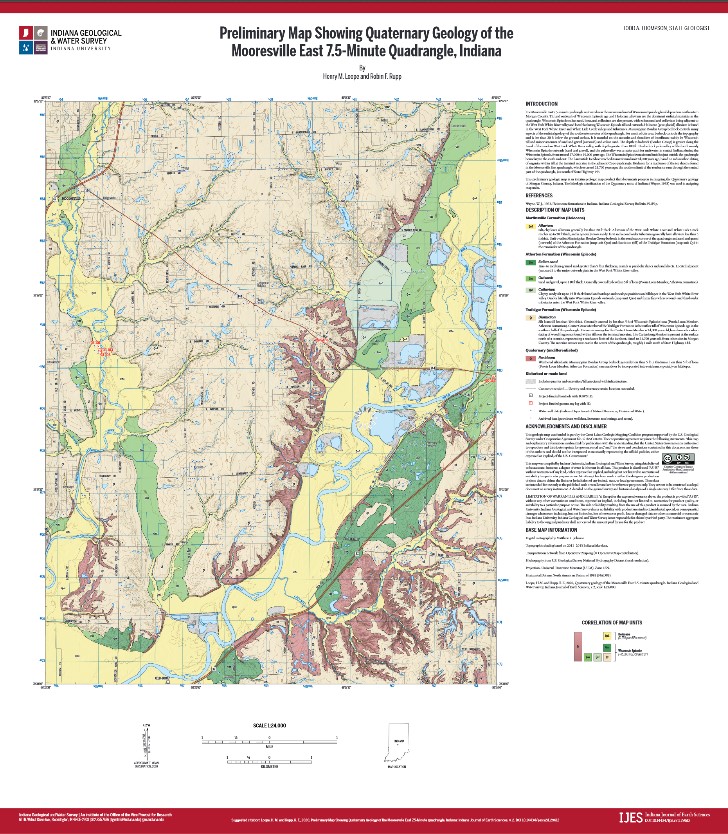 The Mooresville East 7.5-minute quadrangle is situated near the maximum limit of Wisconsin Episode glacial deposits in northeastern Morgan County. Till and outwash of Wisconsin Episode age and Holocene alluvium are the dominant surficial materials in the quadrangle. Wisconsin Episode eolian sand, loess, and colluvium are also present, with eolian sand and colluvium being adjacent to the West Fork White River valley and loess blanketing Wisconsin Episode till and outwash. Holocene (post-glacial) alluvium is found in the West Fork White River and White Lick Creek valleys and tributaries. Mississippian Borden Group bedrock controls many aspects of the surficial geolog y of the southeastern sector of the quadrangle. For much of this area, bedrock controls the topography and is less than 20 ft below the ground surface. It is mantled on the summits and shoulders of interfluves mainly by Wisconsin till and minor amounts of sand and gravel (outwash) and eolian sand. The depth to bedrock (Borden Group) is greater along the trend of the modern West Fork White River valley, with depths greater than 100 ft. This bedrock paleovalley is filled with mainly Wisconsin Episode outwash (sand and gravel), and the paleovalley was a major path for meltwater in central Indiana during the Wisconsin Episode, from around 27,000 to 19,000 years ago. The Wisconsin Episode maximum limit lies just outside the quadrangle boundary to the south and east. The Laurentide Ice Sheet reached its maximum limit 24,000 years ago, based on radiocarbon dating of organics within till at the terminal moraine in the adjacent Cope quadrangle. Evidence for a readvance of the ice sheet is found in the Mooresville East quadrangle, which occurred 21,700 years ago; the southern limit of the readvance runs through the central part of the quadrangle, just south of State Highway 144. This preliminary geologic map is an interim geologic map product that documents progress in mapping the Quaternary geology of Morgan County, Indiana. The lithologic classification of the Quaternary units of Indiana (Wayne, 1963) was used in assigning map units.

Geologic terrain map of the Indiana portion of the Newburgh quadrangle, Indiana-Kentucky