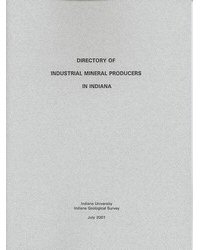 INTRODUCTION: Industrial minerals produced in Indiana include common clay and shale, crushed limestone and dolomite, dimension limeston, dimension sandstone, gypsum, peat, construction sand and gravel, and industrial sand. In addition to these mined commodities, cement, lime, and a small quantity of freshwater pearls are produced in Indiana. Although lime and some ground limestone are not produced from limestone mined at the site, listings for these companies and for one producer of recycled concrete and one producer of art clay have been included as a service to those who use this directory. Minerals contributed $729 million to the state's economy in 2000. Industrial mineral companies operate in all but seven of the 92 counties in the state. Some additional information on Indiana industrial minerals industry is presented in this report as well.

This item is no longer available. Please contact the Indiana Geological and Water Survey Publication Sales Office for more information. Many IGWS publications are available through local libraries.