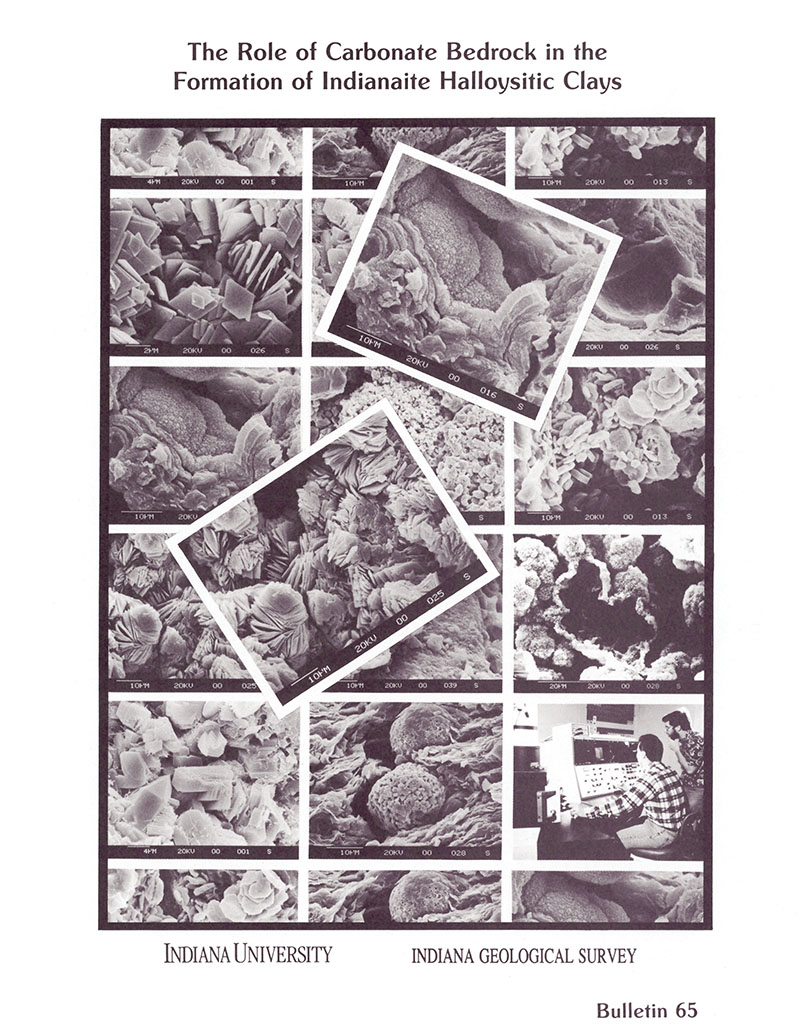 ABSTRACT: Indianaite is a rock term for halloysite and allophane-rich clays that generally occur as layered, bedding-parallel bodies in the shallow subsurface of south central Indiana. These clays have received considerable attention from geologists because of their enigmatic genesis and by industry because of their value as raw material for ceramics, catalysts, and alum manufacture. Recent exposures of indianaite deposits in limestone quarries near Bloomington and Bedford, Indiana, reveal aspects of indianaite structure, texture, and stratigraphic placement that clearly indicate its origin. These deposits were examined in the field and in the laboratory by scanning electron microscopy, x-ray diffraction, differential thermal/thermal gravimetric analysis, and optical petrography to document features indicating genetic mechanisms. Results of these analyses were combined with published data from the previously mined deposit at Gardner Mine Ridge near Huron, Indiana, to develop a model for the genesis of indianaite. Mineral-water reactions hypothesized to have operated in the formation of indianaite are supported by field and laboratory observations. Results of this study indicate that indianaite forms by the interaction of aluminosilicate detritus with vadose water acidified by iron-sulfide oxidation followed by neutralization of this ion-charged fluid by contact with limestone which causes predipitations of indianaite minerals. Replacement of iron sulfides by limonite, replacement of limestone by gypsum, and predipitation of hydros aluminous phases adjacent to the limestone/gypsum are the major indicators of this process. Mineral transformations occur in the aluminous precipitates with time and changes in pH. Increases in pH occur as fluids equilibrate with the carbonate substrate, and lowering of pH may be caused by changes in fluid migration pathways through the precipitate. Formations of indianaite requires that a superadjacent siliciclastic unit rich in iron sulfide be exposed at the weathering surface and that the subadjacent carbonate unit lies at least partially above the water table. This prerequisite juxtaposition of rock types sets the stage for: 1) oxygenated rain waters to react with iron sulfides to produce sulfuric acid; 2) interaction of the acid with aluminosilicates in the siliciclastic unit; 3) migration of the fluid downward to the limestone; and 4) precipitation of aluminous minerals as the pH rises above 4 in the fluid as it contacts the limestone. Precipitation of indianaite alone cave walls suggests that continued downward migration of vadose waters rather than lateral flow at the limestone interface causes dispersed mineralization down subterranean drainages preventing formations of a thick, layered deposit. Thick deposits like the Gardner Mine Ridge deposit are hypothesized to have formed where the fluid migration became horizontal allowing the complete dissolution of the limestone and replacement by indianaite. Precipitation of aluminous indianaite minerals by the interaction of aluminum-charged, acidified water with limestone extends to other published examples of halloysitic clays which form adjacent to and as replacements of limestone or dolostone. Future exploration for indianaite will benefit from the constraints on indianaite genesis presented here. Study of available logs and cores should provide enough information to delimit potential resource areas and confirmatory drilling and field work could easily prove or refute a suspected deposit.

High-calcium limestone and dolomite in Indiana

Corebook of carbonate and associated rocks in Indiana, physical copy