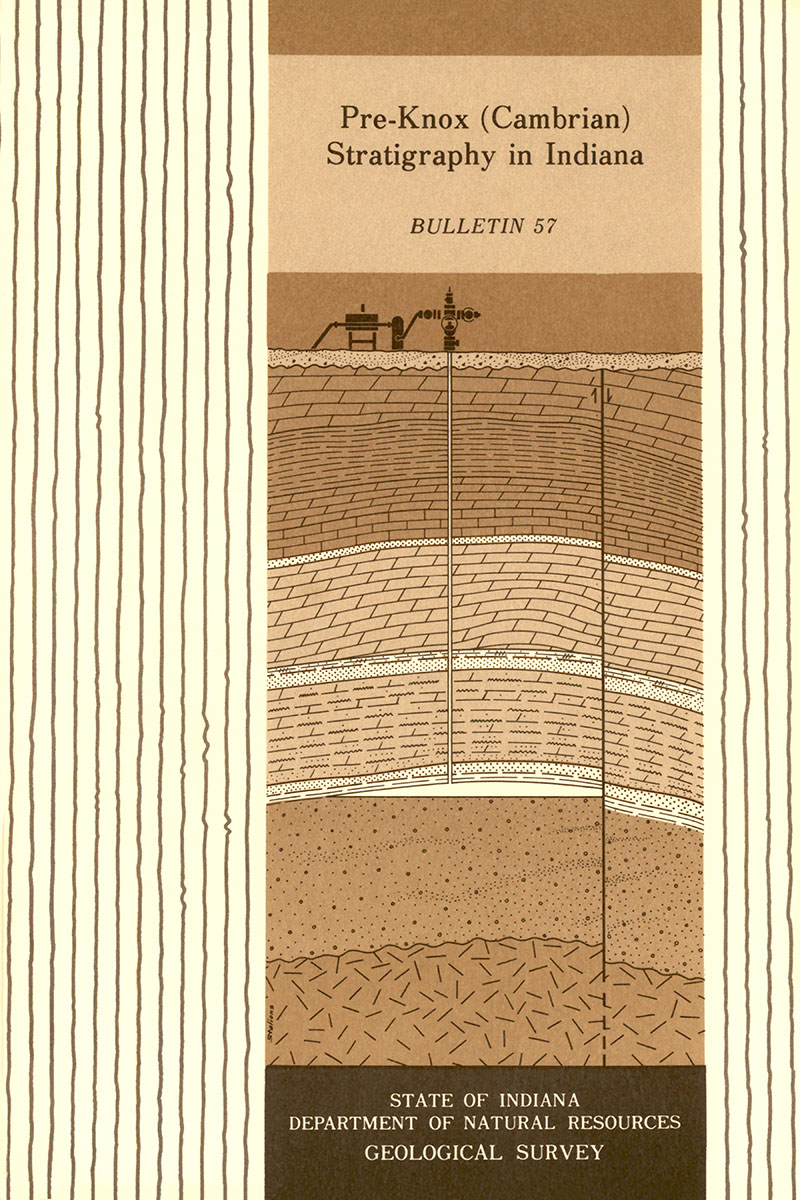 ABSTRACT: Cambrian rocks are present throughout Indiana in the subsurface section. Their identity is based on a study of 121 Indiana test wells which have penetrated pre-Knox strata. Most of the wells are in northern and eastern Indiana. Lateral tracing from tests in adjacent states was used to aid in correlation. The rocks here designated as Cambrian merge indistinguishably with overlying lower Ordovician rocks. The Cambrian rocks have been assigned to the St. Croixan Series and include the Mount Simon Sandstone, the Eau Claire Formation, the Galesville Sandstone, the Ironton Sandstone, the Franconia Formation, and the Davis Formation, along with the lower part of the Knox Dolomite. This study excludes the little understood Knox portion of the Cambrian. The Ironton Sandstone and the Davis Formation as well as the Franconia Formation, which has had only casual understanding before, are recognized for the firsts time in Indiana. The Mount Simon Sandstone is generally a poorly sorted massive sandstone. It is generally grayish red and white and contains thin beds of gray and maroon shales. In places its lower part may contain an arkosic zone. It thins eastward from a thickness of 2,000 feet to 300 feet. The Eau Claire Formation is characterized by siltstone, fine-grained sandstone, shale, and dolomite. Glauconite and feldspar are common constituents. In southern Indiana two oolitic limestone zones also characterize the formation. The Eau Claire thins eastward from a thickness of 1,000 feet to 400 feet. The Galesville Sandstone, present only in northwestern Indiana, is a sandstone composed mostly of fine-to-coarse-grained rounded and frosted quartz grains and attains a maximum thickness of 95 feet. The Ironton Sandstone is found only in northwestern Indiana, ranges from 100 to 150 feet in thickness, and is predominantly medium-grained sandstone, dolomitic sandstone, and dolomite. The Franconia Formation is characterized by glauconitic fine-grained sandstone, siltstone, dolomite, and shale. It attains a maximum thickness of 125 feet in northwestern Indiana and thins to the south and east. The Davis Formation in Indiana, on the basis of faunal evidence and stratigraphic position, includes a carbonate, siltstone, and shale sequence between the base of the Knox and the top of the Eau Claire. The David is believed to be present throughout most of Indiana except the northwestern part and possibly the southwestern part. It ranges from 0 to 220 feet in thickness. Pre-Knox strata in Indiana have potential interest for oil and gas, commercial use for natural gas storage, and disposal of industrial wastes.

Lithostratigraphy of the Sauk Sequence in Indiana