Geology of the Catlin-Mansfield area, Parke and Putnam Counties, Indiana (1976) 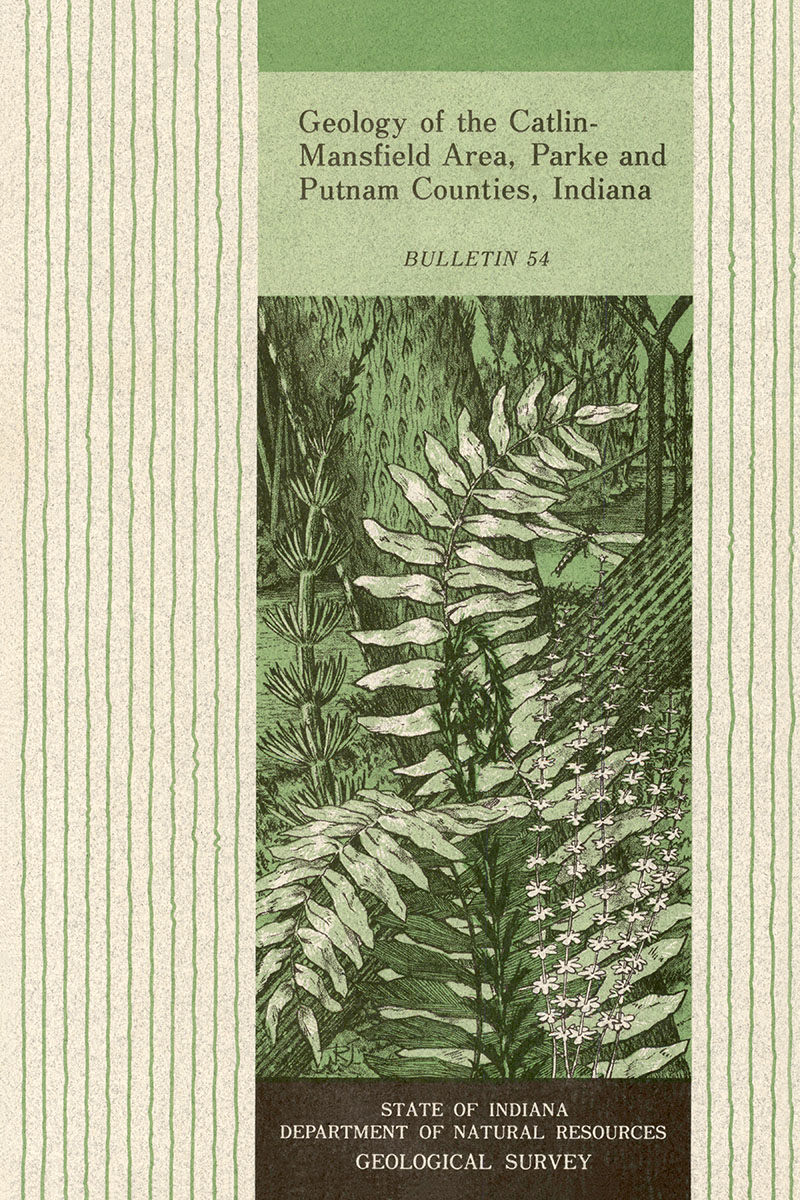 ABSTRACT: The Catlin-Mansfield area covers about 116 square miles in west-central Indiana. It belongs physiographically to the Till Plains Section of the Central Lowland Province and is further subdivided into three surface and two bedrock physiographic units. Unconsolidated glacial and postglacial deposits of the Martinsville, Atherton, Traflgar, and Jessup Formations of the Quaternary System ranging from a few feet to 270 feet in thickness blanket this area. A preglacial erosional unconformity with rugged local relief of 250 feet lies on the underlying consolidated sedimentary rocks of the Pennsylvanian and Mississippian Systems. The outcropping rocks belong to the Staunton, Brazil, and Mansfield Formations of the Pennsylvanian System and to the Ste. Genevieve Limestone of the Mississippian System. The Staunton Formation consists of about 115 feet of interbedded sandstones and shales and intercalated beds of coal, limestone, and underclay. Two named units, the Silverwood Limestone and Perth Limestone Members, are present. The lower boundary of the Staunton is herein redefined to the top of the Minshall Coal Member of the underlying Brazil Formation, and the Perth Limestone Member is therefore placed in the lower part of the Staunton. The Brazil Formation is also redefined to include those rocks from the top of the Minshall Coal Member to the base of the Lower Block Coal Member, thus including about 70 feet of interbedded sandstones and shales and the Upper Block Coal Member. The Mansfield Formation, a unit consisting of interbedded sandstones and shales and thin coalbeds and including the Shady Lane Coal Member and the Ferdinand Limestone Bed, ranges from a few feet to more than 300 feet in thickness in the area. Two reference sections near the type locality at Mansfield are herein designated. Compared with sections of the Mansfield Formation in southern Indiana, the Mansfield in the Catlin-Mansfield area is relatively barren of coal and marine zones. The Pennsylvanian-Mississippian unconformity, one of the most conspicuous geologic features of the area, is a widespread erosion surface with local relief of as much as 250 feet. Rocks of Pennsylvanian age lie on older Mississippian formations ranging through about 300 feet of stratigraphic section. A hint of superposition of drainage lines of the younger post-Pennsylvanian drainage system with those of this ancient erosion surface is apparent. Coal reserves amount to 78,316,000 short tons in the Catlin-Mansfield area. In addition to coal, there are shale and clay, limestone, sandstone, sand and gravel, water and possibly oil and gas. Some prospecting for reservoirs for underground storage of natural gas has been done.