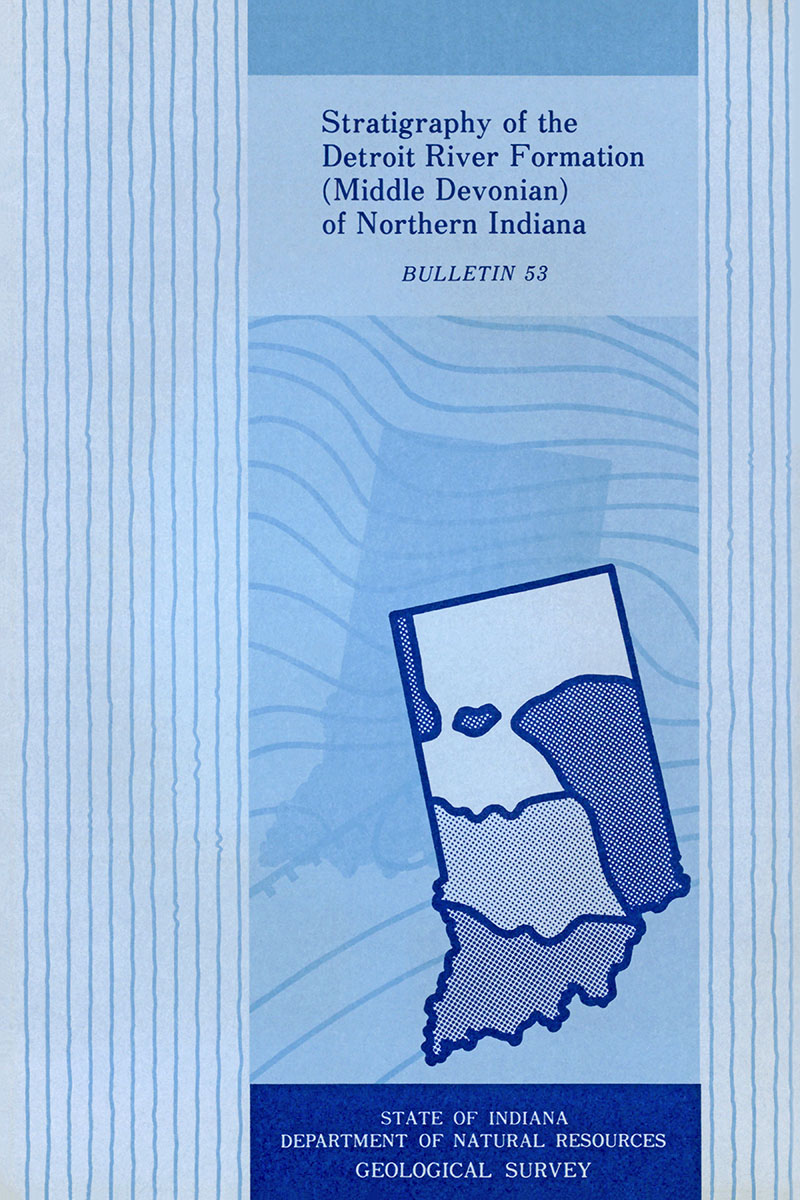 ABSTRACT: The Detroit River Formation in approximately the northern three tiers of Indiana counties comprises about 85 cubic miles of rocks that are apportioned among carbonates, 93 percent, sulfate evaporites, 6 percent, and sandstones and shales, 1 percent. Ranging in thickness from 0 to 160 feet, the formation makes up a lower part of the Muscatatuck Group (middle Devonian carbonate section) and thus rests, unconformably, on various Silurian units and underlies the overlapping Traverse Formation, which extends beyond the southernmost Detroit River rocks and across the Kankakee Arch. The lower third of the formation to its entirety in some places consists dominantly of earthy dense dolomites and appreciable amounts of well-intercalated anhydrite and gypsum. Most of these dolomites may be characterized petrographically as sandy dolomicrites and laminated and pelletoidal dolomite mudstones, but these are parts of repetitive cyclic deposits, mostly of tidal-flat and sabkha origin, so that other dolomites are also commonly interbedded. All these rocks constitute essentially the newly named Grover Ditch Member of the Detroit River Formation. The middle third of the formation, particularly in northwestern Indiana, is dominated by a brown saccharoidal porous replacement type of dolomite, which is also found in interbedded with other dolomites at virtually any level in the formation. Petrographically, this dolomite consists of grainstones, packstones, and wackestones variably recognized as originally biofragmental, pelletoidal, and mat stromatoporidal. These rocks represent shallow-water shoals, bars, and banks and, where present in predictable spatial relationships, make up the newly designated Milan Center Dolomite Member. The upper third of the Detroit River, particularly in northwestern Indiana, is mostly lithographic limestone and dolomitic limestone that have some interbedded grainstones and packstones and, in places, as much as 30 feet of massive anhydrite and gypsum. Even the carbonate rocks are partly evaporitic in origin, and altogether these rocks were formed in intertidal to evaporite-lagoon environments. Where stratigraphically distinct, they constitute the newly named Cranberry Marsh Member. The isochronous Tioga Bentonite Bed has been newly found sparingly and in transgressive relationship in all three members, which, together with the thickness and sedimentational relationships, suggests the complexity of environmental history and of laterally and vertically shifting facies. Early Detroit River time as represented in Indiana ushered in extensive intertidal to tidal-flat to sabkha environments throughout the northern counties, but during later time, differentiation occurred in which deeper deposition, yet shallow-water and normal marine, dominated in the northwest and the sabkha influence remained mostly hypersaline conditions, in which intertidal to lagoonal environments prevailed, including one marked episode when a significant amount of sulfate evaporite formed in tidal-flat lagoons or bays. In general, these distinctly evaporitic characters of the Detroit River are owed partly to the more or less restricted basin, here called the St. Joseph Flats, that existed north of the present Kankakee and Cincinnati Arches in Indiana and thus north of the old Silurian reef platform and basin-margin Fort Wayne Bank, west of the present Findlay Arch in northwestern Ohio, and south of the Amherst-Basin replenishment occurred as water entered through the Tippecanoe Inlet (new name) in northwestern Indiana and possibly elsewhere, including the Benton Harbor Inlet in southwesternmost Michigan.

Age of the Detroit River Formation in Indiana