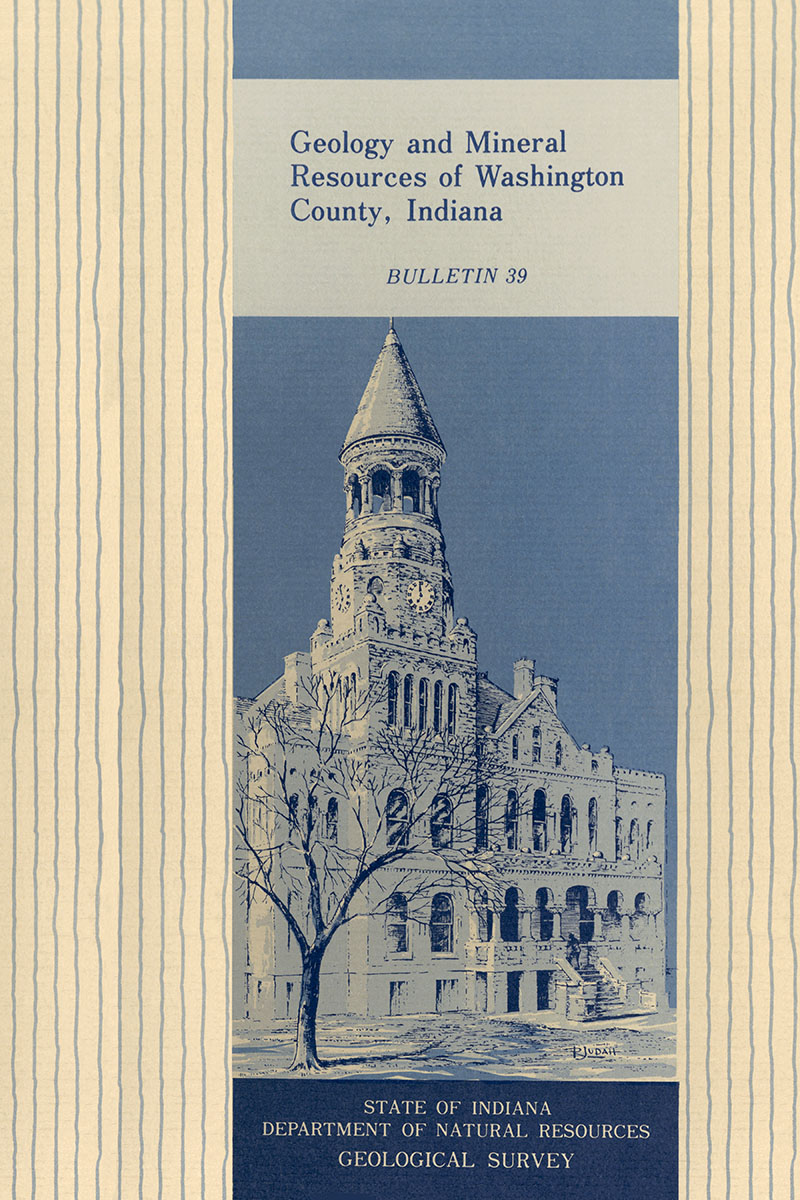 ABSTRACT: Washington County, in south-central Indiana, contains parts of featureless Scottsburg Lowland, the rolling and dissected Norman Upland, the sinkhole-dotted Mitchell Plain, and the highly dissected Crawford Upland. The county is drained by four river systems: principally the three forks of Blue River; the East Fork of White River, into which flows the tributary Muscatatuck River; the headwater branches of Lost River, which also eventually flows into the East Fork; and the Muddy Fork of Silver Creek, which drains about 3 square miles in the southeastern part of the county. Washington County contains surface deposits of Mississippian, Tertiary, and Quaternary age. The oldest rocks exposed are those near the base of the Mississippian section, the thick Borden shales and siltstones, followed by the Harrodsburg, Salem, St. Louis, Ste. Genevieve, and Paoli Limestones, all of which were deposited in shallow continental seas a few hundred feet deep. Above the limestone section are the Bethel Formation, the Reelsville Limestone, and the Elwren Formation. These formations consist of, respectively, sandy shale, limestone, sandstone, limestone, and sandstone, which were deposited in swamp, marine, stream, or near-shore marine environments. Sometime during the Tertiary Period, surface streams or waters of a short-lived marine invasion deposited the sand of the Ohio River Formation, which is exposed in places in the eastern part of the county. From the Tertiary or earlier time to Recent, thick soils and colluvial deposits have formed on parts of the Mitchell Plain. During the Pleistocene Epoch, Illinoian glaciers entered the northern and eastern parts of the county and deposited till and sand and gravel along and beyond the Knobstone Escarpment. During the Wisconsin Age, outwash from glaciers to the north formed a valley train in the East Fork of White River, a part of which is in the extreme northwest corner of the county. Sand dunes were derived from the valley-train material, and lake clays and silts were deposited in ponded tributary valleys along the northern part of the county. In recent time, stream alluvium consisting of clay, silt, sand and coarse gravel has covered most of the lake deposits and the valley bottoms of the county to depths ranging from a few feet to a few tens of feet. The average dip of surface rocks of Washington County is about 25 feet per mile (less than a third of a degree) to the west-southwest. There are some local structural features, including part of the Mt. Carmel Fault, the southern nose of the associated Leesville Anticline, and another small anticline in the south-central part of the county. Structure contours in the north-central part deviate from the normal northwest trend and trend westward, probably because of uplift along the Mt. Carmel Fault. Mineral resources of the county that have been used in the past include limestone, sand and gravel, gas, ground water, and surface water. Shale and sandstone also have been used on a small scale. Shale is found in rocks of the Borden Group, in the St. Louis Limestone, and in the Bethel Formation. Clay material is found in glacial till, in lake deposits , and in residual soils of the county. The Borden Group and the Sample Formation both contain usable sandstone, and the Harrodsburg, Salem, Ste. Genevieve, Paoli, and Beaver Bend Limestone contain usable limestone. Sand is present in the Ohio River Formation, in glacial kames, in dunes, and in small residual deposits, and gravel is present in glacial kames and valley-train deposits. Small amounts of gas have been produced from wells of the county, but no oil has been produced. A good supply of ground water probably is available in the sand and gravel aquifer of the East Fork of White River. Smaller supplies of ground water can be obtained from water-bearing zones at the Borden-Harrodsburg and Salem-St. Louis contacts. Lakes and ponds built in rocks of the Borden Group should hold water adequately for agricultural and municipal needs. Many and unusually large geodes, some of which contain unusual minerals, can be found in the lower Harrodsburg and upper Borden rocks of the county.

Geologic formations on which and with which Indiana's roads are built