The Silurian formations of northern Indiana (1964) 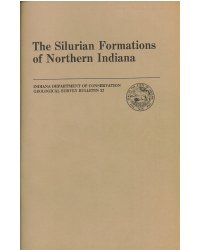 ABSTRACT: The Silurian rocks in northern Indiana include, in ascending order, the Brassfield Limestone (lower Silurian), the Salamonie Dolomite, the Louisville Limestone, and the Wabash Formation, all of the Niagaran Series (middle Silurian), and the Salina Formation (middle? and upper Silurian). Some of these names are new or newly applied in this area. The oldest exposed Silurian rocks (Brassfield) are found in the southeastern part of the area, and they are highest on the major positive structural feature of the area, which is the northwest extension of the Cincinnati Arch. Generally younger rocks are found exposed northwestward, but the Salina Formation interrupts this pattern and is exposed in two areas centered in Howard and Cass Counties and in Jasper County. A disconformity appears to separate Silurian from older rocks, and the upper part of the Richmond Group (upper Ordovician) possibly is absent from parts of northwestern Indiana. The Ordovician Silurian boundary can be identified readily by conodont faunas, and no variation of the regular order of succession of named lower Silurian units has been observed. Thus there is no evidence favoring the classic idea of a barrier between northern and southern parts of the State. The Brassfield Limestone is 6 to 100 feet thick and consists of mostly noncherty partly glauconitic carbonate rocks. The formation corresponds only to the lower part of what commonly has been called the Brassfield in subsurface studies. As thus restricted, the Brassfield in its different areas is equivalent to part of the Edgewood Limestone and the lower part of the Kankakee Dolomite of northeastern Illinois and the lower part of what has been called the Cataract Formation in northern Indiana and southern Michigan. The Salamonie Dolomite (new name; lower Niagaran) is 95 to 275 feet thick, partly argillaceous and cherty in its lower part, and pure vuggy dolomite in its upper part. This formation is equivalent approximately (1) in its lower and middle parts to the Osgood Formation and the Laurel Limestone through the Cedarville Dolomite of Preble County, Ohio, (3) to most of the Kankakee and Joliet Dolomites of northeastern Illinois, and (4) to some of the so-called Brown Niagaran and White Niagaran rocks and much of the undifferentiated Niagaran rocks of the Michigan Basin. The Waldron Formation (new surname), about 15 feet thick, consists of nodular argillaceous dolomite; the Louisville Limestone, about 60 feet thick, consists variably of argillaceous and fossil fragmental rocks. These formations, of middle Niagaran age, are absent from the area that generally corresponds to the northern two tiers of Indiana counties and where the combined thickness of the underlying Brassfield and Salamonie rocks is greater than 300 feet. In this area the Salina Formation overlies the Salamonie Dolomite. The Waldron and the Louisville correspond to the Waukesha Limestone and possibly to the lower part of the Racine Dolomite of northeastern Illinois. The Wabash Formation (new name; upper Niagaran) is about 150 to more than 200 feet thick and consists of reef-bearing argillaceous and cherty carbonate rocks. It includes the Mississinewa Shale and Liston Creek Limestone Members (new ranks) in their type areas in north- central Indiana. The term Huntington Lithofacies (no status in systematic nomenclature) is given to reef, biohermal, and bank lithologies, and the name Fort Wayne Bank is applied to the basin-fringing accumulation of vuggy biohermal and biostromal dolomites that extend from near Fort Wayne to Lake Michigan. The Wabash Formation terminates northward in its bank phase against the Salina Formation, generally along the southern part of the northern two tiers of Indiana counties. It corresponds mostly to the Racine Dolomite of northeastern Illinois and to the Guelph Dolomite of areas north and east of Indiana. The Salina Formation (Niagaran? and lower Cayugan) consists variably of laminated, shaly, cherty, or pure carbonate rocks. This formation is 500 feet thick in northeastern Indiana but wedges out southwestward in two fingerlike projections that apparently are controlled structurally. These projections lie in the Logansport Sag and in the Jasper Sag (new name), where Salina and Wabash rocks are juxtaposed. The Salina includes the Kokomo and Kenneth Limestone Members (new ranks) and other, unassigned rocks. The Salina Formation in Indiana corresponds mostly to the A unit and partly to higher units of that formation as understood in Michigan. Possibly the Salina in its areas of great thickness in Indiana and in Michigan has partial age equivalence with Wabash rocks and rocks as old as the Waldron, but not necessarily in areas having close proximity.