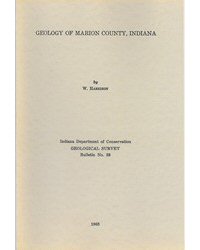 Item Number: B28
Map Scale: 1:48,000
Free Digital Download
ABSTRACT: The configuration of the ground surface of Marion County and the composition of the materials that underlie it are results of the last major glaciation of central Indiana. Ninety to a hundred cubic miles of ice covered the county at the height of the last (Champaign)advance of the East White sublobe, about 20,000 years ago. The Champaign ice upon melting deposited a layer of drift 1 to 50 feet thick. Major valleys of Marion County were formed by streams of melt water flowing in ice-walled channels; numerous minor valleys, on the other hand, originated when streams flowing parallel to decaying ice margins cut into the drift surface. About 80 percent of the virgin surface of Marion County consits of hummocky moraine of low relief (0 to 10 feet), which exhibits closed ice-disintegration ridges, till hummocks, kames, and linear ridges (composed of till or stratified drift). Outwash plains and terraces constitute about 15 percent of the surface, and the remaining 5 percent is composed of post glacial alluvium. Unconsolidated deposits that overlie the bedrock surface range from about 10 to 400 feet in thickness and average 140 feet thick. Both the Kansan and the Illinoian drift sheets are recognized in well logs. The surficial Wisconsin drift exhibits the following till stratigraphy: (1) a basal, classical Wisconsin till (the Shelbyville, 21,200 ñ 800 years B.P.), and [before the present]), (2) till of the Champaign advance (20,000 ñ 800 years B.P.), and (3) local tills deposited by minor readvances of the retreating Champaign ice. Two tills that underlie the Shelbyville drift have been dated at greater than 37,000 B.P. and may be of early Wisconsin age. All tills exposed in Marion County are high in carbonates and coarsely silty to finely sandy. Approximately 50 percent of the tills (by weight) consists of pulverized Canadian bedrock, 30 percent of rock material from the Lake Ontario and Lake Erie basins, and 20 percent from bedrock eroded from Ohio to Indiana. Formation underlying the bedrock surface are limestones and shales of late Ordovician age; limestones, dolomites, and shales of Silurian age; limestones and shales of Devonian age; and limestones, shales, and sandstones of early Mississippian age. The physiographic units of the bedrock surface include the Norman Upland, Scottsburg Lowland, and Muscatatuck Regional Slope. Major geologic resources of Marion County consist of soils, water, and sand and gravel. A minor resource is peat, and limestone appears to be a possible commercial resource.