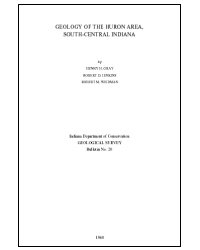 Bulletin 20 Abstract: and includes approximately 117 square miles of area In the physiographic province known as the Crawford Upland. Nearly flat-lying sedimentary rocks of late Mississippian and early Pennsylvanian age underlie the hilltops and slopes, and unconsolidated silts, sands, and gravels, mostly of Pleistocene age, partly fill the major valleys. Exposed rocks of late Mississippian age are assigned to the Blue River, West Baden, and Stephensport Groups (new names), in ascending order. Of the Blue River Group, which includes three formations that consist largely of limestone, only the upper 70 feet is exposed. The West Baden Group is approximately 115 feet thick and consists of five formations which are made up principally of shales but include also some sandstones and limestones. The Stephensport Group is approximately 140 feet thick and consists of almost equal parts of limestones, sandstones, and shales belonging to five formations. Between rocks of late Mississippian age and the rocks of early Pennsylvanian age that overlie them is an unconformity that represents a period of erosion of sufficient duration to have beveled the older rocks and then carved into them valleys as much as 100 feet deep. Statistical analysis of available observations indicates that sandstone deposits in the lower part of the Mansfield Formation are not concentrated at the unconformity and that limestone is not more abundant immediately under the unconformity than would be expected from the percentage of limestone in the rocks on which the unconformity was developed, but highly aluminous clays are concentrated at the unconformity, probably as a residual deposit. Rocks of early Pennsylvanian age in the area are assigned to the Mansfield Formation, have a maximum exposed thickness of approximately 250 feet In the southwest corner of the area, and consist of sandstones, shales, and mudstones and thin and discontinuous beds of coal and clay. The Mansfield Formation is divisible into two parts, a lower part consisting largely of crossbedded sandstones and an upper part made up principally of mudrocks and thin-bedded sandstones that have gray shale partings. Coal, crushed limestone, whetstones and grindstones, iron ore, dimension sandstone, and clay have been produced from the rocks of the area, but are no longer of economic importance. The only mineral raw material now produced in quantity is gypsum, which is taken from rocks of middle Mississippian age in underground mines in the western part of the area.