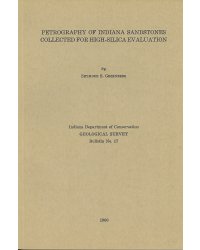 Bulletin 17 Abstract: Sandstones from the following stratigraphic units were collected for this study: St. Peter Sandstone (middle Ordovician); Sample, Big Clifty, and Tar Springs Formations (upper Mississippian); Mansfield Formation (lower Pennsylvanian); Staunton, Linton, Petersburg, and Dugger formations (middle Pennsylvanian); and Shelburn Formation and Merom Sandstone (upper Pennsylvanian). The largest number of samples came from the Big Clifty and Mansfield Formations, and the smallest number came from the St. Peter Sandstone and Sample Formation. The upper Mississippian sandstones that were sampled are very fine to fine grained; the sandstone sampled from the Mansfield is fine to course grained; and the post-Mansfield sandstone that were sampled are very fine to medium grained. Size parameters obtained from cumulative frequency curves often can aid in the differentiation of sandstones. The percentage (by weight) of heavy minerals generally is less than 0.5. Stable species, such as leucoxene, zircon, tourmaline, and rutile, as well as iron oxides (including magnetite), are the chief constituents of the heavy-mineral fractions. The light-mineral fractions contain abundant quartz and minor amounts of feldspar and muscovite and also sporadic traces of biotite and calcite. Kaolinite is more abundant than illite in all the sandstones sampled. The immediate sources of all the sandstones generally were reworked sediments; nonsedimentary rocks (predominantly acid igneous) contributed very little detritus in the latest cycle of deposition. The middle and upper Pennsylvanian sandstones received more detritus from these nonsedimentary sources than did any other sandstones. The constituents of the Mansfield sandstones were reworked more than those of post-Mansfield age. Diagenesis, chiefly iron oxide staining and the formation of clay minerals, greatly affected the petrography of the sandstones. This study indicates that mineralogic and chemical differences may be used to distinguish some sandstones but that these differences are not as usable for this purpose as size criteria. Of all the sandstones studied, those from the Mansfield Formation would be the best source for high-silica sand. Economic factors, such as overburden, extent of deposits, and cost of beneficiation, however, would influence greatly the commercial possibilities of the sandstones.