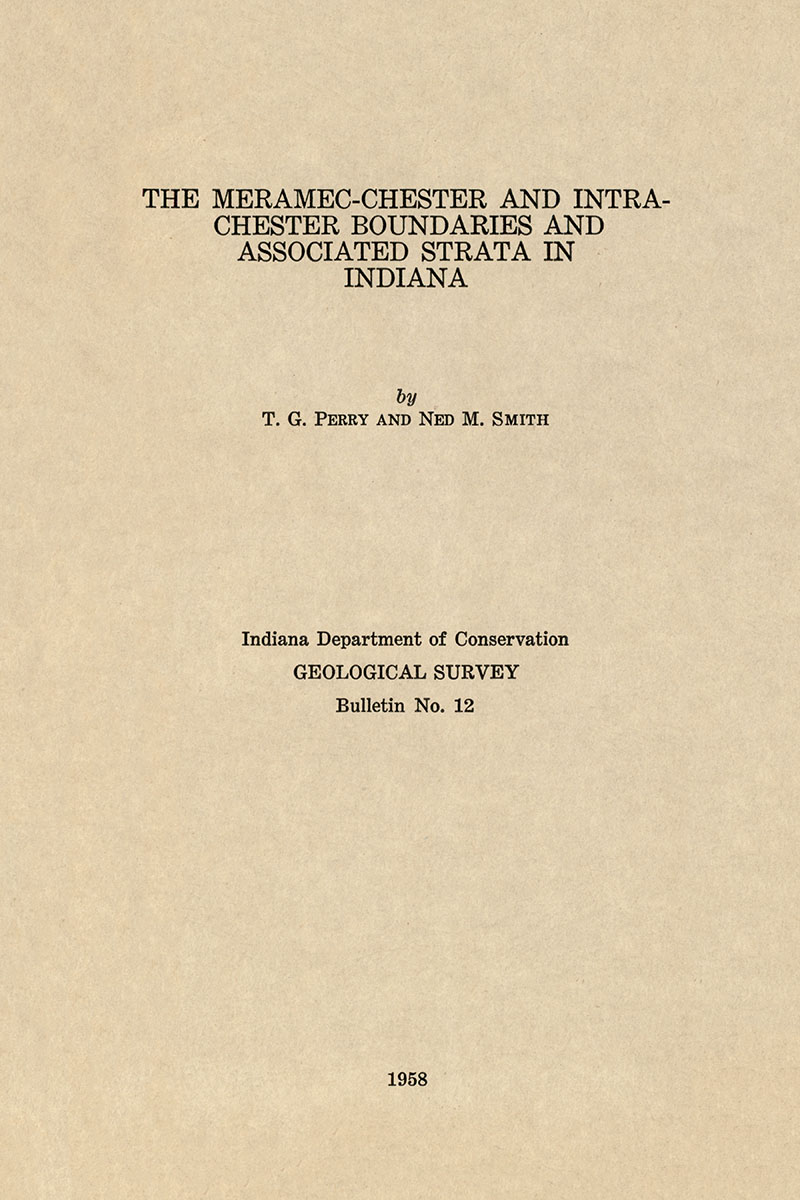 Bulletin 12 Abstract: The Ste. Genevieve limestone (late Meramec) and Chester formations (late Mississippian) crop out in a northward-narrowing wedge from the Ohio River to west-central Putnam County, in central Indiana. Their exposure belts include parts of Harrison, Crawford, Washington, Orange, Lawrence, Martin, Monroe, Greene, Owen, and Putnam Counties. Chester strata but not the Ste. Genevieve limestone crop out in Perry and Dubois Counties. Mapping the upper boundary of the Ste. Genevieve limestone establishes the areal occurrence of the Meramec-Chester contact and also aids int eh determinations of the geographic determination of the geographic distribution of the lower Chester group. Mapping the upper boundary of the Beech Creek limestone completes the areal delineation of the lower Chester group. Mapping the top of the Glen Dean limestone determines the areal extent of the middle Chester group and also the exposure belt of the upper Chester group because the Mississippian-Pennsylvanian boundary as shown on the geologic map of Indiana is essentially correct. Measured sections that display the mapped boundaries are included in this report to indicate the characteristics of the strata that are associated with these contacts. Pre-Pennsylvanian erosion removed progressively older Mississippian formations at increasing distances north of the Ohio River. Thus, the Ste. Genevieve limestone and lower Chester formations crop out from the Ohio River to Putnam county, where they have been largely removed by pre-Pennsylvanian erosion; the middle Chester group is represented locally in southern Owen County by only the Cypress and Golconda formations; and rocks of the upper Chester group occur very locally or are absent north of the East Fork of White River. Because of the relief on the pre-Pennsylvanian unconformity, Meramec and Chester formations near the Mississippian-Pennsylvanian boundary are exposed unpredictably and locally. Structural contours were drawn on the upper surface of the Ste. Genevieve and Beech Creek limestones throughout their outcrop belts in Indiana; a 50-foot contour interval was selected to conform with the number and accuracy of field observations. The contoured surfaces reveal a mild, persistent structural anomalies and well-defined local basins and domes. The regional strike of the Ste. Genevieve and Beech Creek limestone is about N. 25ø W., and their regional southwesterly dip averages to 25 to 40 feet per mile. Economic products of the Ste. Genevieve, Aux Vases, Paoli, Beech Creek, Golconda, and Glen Dean formations are mainly crushed stone and agricultural lime. Many springs emerge from the base of Chester limestones, particularly the Beech Creek, and commonly afford a convenient water supply for part of the rural population in the outcrop belt of the Chester series.

Subsurface Stratigraphy of the Blue River Group (Mississippian) in Indiana

Geometry and origin of oolite bodies in the Ste. Genevieve Limestone (Mississippian) in the Illinois Basin