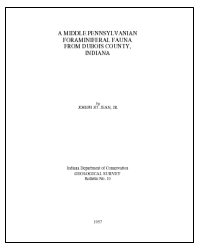 Bulletin 10 Abstract: This report describes 23 species belonging to 14 genera of lower middle Pennsylvanian Foraminifera from a single outcrop in Dubois County, Ind. Three new species of Endothyra and one of Endothyranella are described. Seven species belong to the family Fusulinidae; the other species are the small Foraminifera. A consideration of the biologic and lithologic constituents of the outcrop indicates that the fauna is cosmopolitan and is from shallow water. The large number of young specimens indicates that the fauna probably was protected from predators and from adverse physical conditions. Most of the specimens are phyloneanic (small simple forms which lack complexities of ornamentation and structure). The Foraminifera correlate especially well with formations of early Des Moines age in Illinois, Texas, and Oklahoma. Species range from lower to upper Pennsylvanian in age. Thin sections of every species were made to show that in every species the wall is calcareous and in many species is composed of a thin, dense, tectumlike outer layer and a thicker, transversely fibrous or alveolarlike inner layer. The granular appearance which some students of Foraminifera have termed arenaceous is not arenaceous or agglutinated, but is caused by recrystallization. of the original wall during the processes of fossilization. Wall structure, phylogeny, and techniques in sectioning small Upper Paleozoic Foraminifera are discussed. Special attention is given to Endothyra bowmani Phillips, the genotype of Endothyra; Plectogyra Zeller is placed in synonomy with Endothyra.