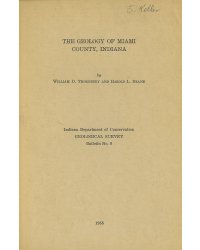 Bulletin 8 Abstract: Most of the geomorphic features of Miami County are of glacial origin or are glacial deposits that were modified by postglacial erosion. Three major and nine smaller valleys were sluiceways for glacial melt waters. The Wabash and Eel Valleys carried glacial outwash during both the Tazewell and Cary subages of the Wisconsin. As a result, thick and extensive valley trains were developed down these valleys. During part of the Cary subage the Wabash sluiceway was the outlet for Lake Maumee. Glacial deposits older than Wisconsin have not been recognized positively in Miami County. Wisconsin deposits consist of till, outwash, lake silts and clays, and undifferentiated sands of the Tazewell substage and outwash and wind-blown sands of the Cary substage. The upland area of the county has within it parts of three distinct units: parts of the Tipton till plain and the Packerton and Union City moraines. The till of the Packerton moraine is more sandy than that of the ground moraine of the Tipton till plain to the south and has associated with it extensive sand deposits of uncertain origin. Devonian limestones of Hamilton age and the Silurian Kokomo limestone, Liston Creek limestone, Mississinewa shale, and associated Niagaran bioherms constitute the exposed bedrock. An old-age topographic surface, correlated with the late Tertiary Lexington peneplain of Kentucky and southern Indiana, is buried beneath a glacial cover. Another erosional level, which probably is of the same age as the Parker strath, is developed at an altitude of 400 feet along the buried Teays and Metes, (preglacial Eel) Valleys. The “deep stage” was not recognized In Miami County. The greatest determined drift thickness is 451 feet and is at the place where the Packerton moraine crosses the Metea Valley. The average thickness of drift, however, is approximately 125 feet. Economic resources are oil and gas, limestone, sand and gravel, ground water, marl, and peat. Oil and gas are produced from rocks of Trenton (Middle Ordovician) age. Quarries formerly were operated In the Kokomo limestone and Niagaran bioherms. Sand and gravel are obtained from terraces along the Wabash, Eel, and minor sluiceways, from outwash gravels beneath Recent alluvium, from outwash that was buried beneath till, and from kames and eskers. Thick beds of gravel in buried valleys and local lenses of gravel within till provide a large potential water supply. Marl and peat have been mined from depressions in the Packerton moraine and the floodplain of the Wabash River.