Geology and mineral deposits of the Jasonville quadrangle, Indiana (1952) 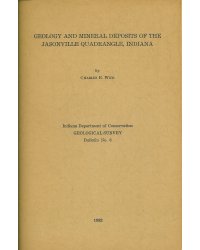 Bulletin 6 Abstract: The Jasonville quadrangle, located in parts of Clay, Greene, and Sullivan Counties in west central Indiana, contains approximately 58 square miles. The rocks exposed in the quadrangle comprise the Staunton, Linton, Petersburg, and Dugger formations and are Alleghenian or Des Moinesian (Pennsylvanian) in age. Three commercial coals, III, IV, and V, and two thin coals, IIIa and IVa, crop out in the area. The Upper and Lower Block coals probably underlie most of the quadrangle in irregular, small basins. Most of the streams in the Jasonville quadrangle join the Eel River, which flows in a Pleistocene sluiceway across the northeast corner of the quadrangle. Because 10 to 20 feet of Illinoian glacial till covers the uplands and Recent alluvium covers the valley floors, Pennsylvanian rocks are exposed in small, isolated outcrops. Drilling information indicates that the Pennsylvanian rocks dip southwestward 30 feet to the mile, but small, isolated domes and noses are present. Of an estimated original 440,000,000 tons of Coals III, IV, and V, more than 75,000,000 tons have been mined or rendered unminable. Probably less than 60 percent of the estimated 365,000,000 tons of coal remaining in the ground can be recovered. Gas and oil have not been produced within the quadrangle, despite rather intensive recent drilling. Small amounts of sand, gravel, sandstone, and limestone have been produced for road metal.

Geologic formations on which and with which Indiana's roads are built