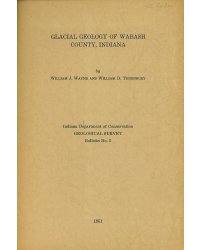 Bulletin 5 Abstract: Most of the topographic features of Wabash County are of glacial origin or are glacial deposits eroded by postglacial streams. Shales, limestones, and dolomites, all Silurian, are exposed only along some of the deeper valleys. Four major rivers and six smaller streams in Wabash County flow in glacial sluiceways. Only the Eel and Wabash sluiceways carried large quantities of melt-water. The Eel River valley train occupies an interlobate position, and the Wabash Valley bears evidence of its roles as a sluiceway and as an outlet for glacial Lake Maumee in late Cary time. Three topographic areas comprise the upland part of Wabash County: the Tipton till plain, the Mississinewa terminal moraine, and the Packerton interlobate moraine. The buried bedrock surface of the county, as revealed by well records, suggests an old age topography which is correlated with the Lexington peneplain of Kentucky and southern Indiana. The preglacial and interglacial Teays River was the main stream across the county, and its associated "deep stage" was intrenched more than 300 feet below the upland. Where the "deep stage" is crossed by the Mississinewa moraine, the maximum thickness of drift is 410 feet. The present course of the Wabash River originated in late Tazewell time. Till of the Cary substage is heavier, blockier, and more clayey than till of the Tazewell substage, which locally contains more quartz sand. A few exposures of weathered material, the thickness of the buried leached zone beneath Cary till, and the difference in depth of leaching of the surficial Tazewell and Cary tills suggest that the Tazewell-Cary interglacial sub-age lasted 10,000 to 12,500 years. A high percentage of spruce and fir pollen in a buried muck deposit indicates a cool, humid climate during the sub-age. Economic resources within the drift consist of marl, gravel, sand, and ground water. Marl is restricted to the area of the Packerton moraine. Sand and gravel occur in the Packerton moraine, in abundance along the Eel and Mississinewa valley trains, and along the Wabash and Salamonie Valleys where they cross preglacial and interglacial valleys. Buried valleys, particularly the Teays and Eel, contain large potential supplies of ground water.