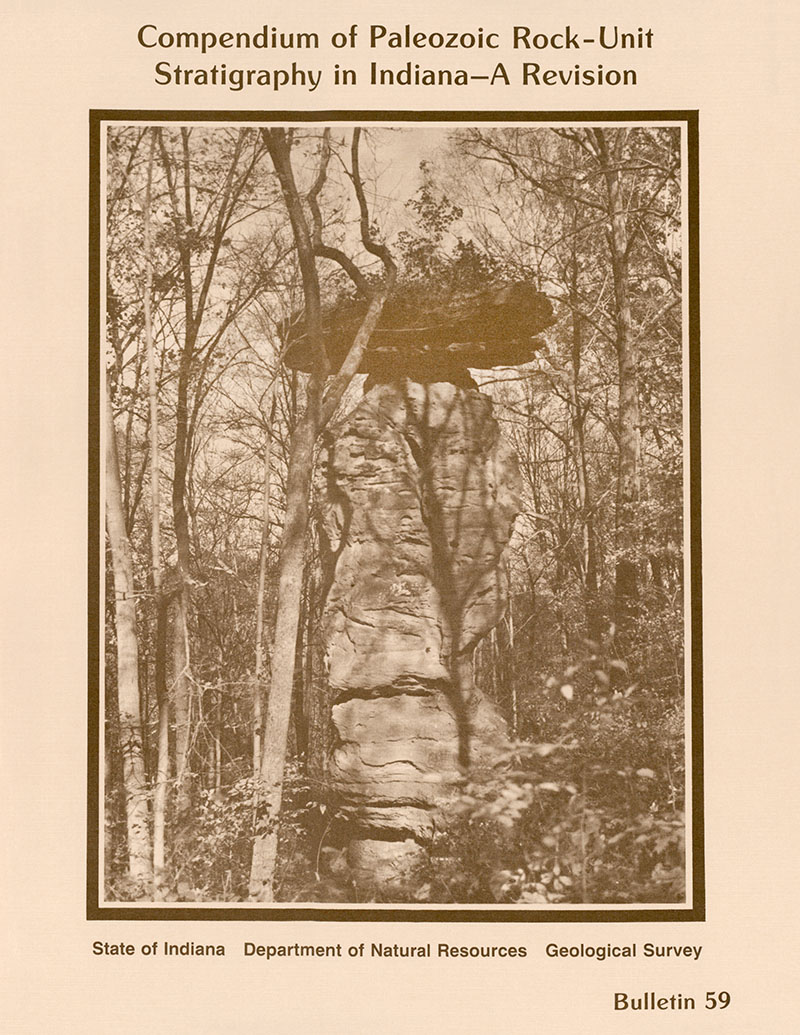 INTRODUCTION: Since the early 1950's the Geologic Names Committee of the Indiana Geological Survey has maintained charts showing the more important rock- and time-stratigraphic names that have been used in Indiana. These charts further show the current classification that is recommended for general use by Survey employees and many other persons who use and contribute to the geologic knowledge of the state. These charts also show many, but not all, obsolete, colloquial, trade, and synonymous terms along with some commonly used bionomenclatural terms. They were first published in 1970, together with essential descriptive and correlative information for each current rock-unit name, in Indiana Geological Survey Bulletin 43, "Compendium of Rock-Unit Stratigraphy in Indiana" (Shaver and others, 1970). The unification and stabilization of an ever-changing stratigraphic nomenclature should enhance the production, understanding, and dissemination of geologic knowledge. The 1970 compendium was successful, one evidence being the need to reprint it twice during the ensuing years. But the very kind of investigation it was meant to foster has also made much of that compendium obsolete. Three kinds of geologic programs in particular have ensured this result. One program consists of a great many subsurface stratigraphic investigations that have been carried on during the past two decades, not only by Survey employees but also by Indiana University faculty members and graduate students and by still other geologists representing both academic and industrial interests. Basic surface stratigraphic investigations have continued, of course, by the most striking phenomenon has been the nearly wholesale classificatory revisions of some of the Paleozoic systems of Indiana rocks. These revisions have resulted from deliberately intensified studies of extensive subsurface rock sequences that had been virtually ignored. Long-accumulating drilling records were necessary, of course, to foster these studies. Another program that has led to revision of the first compendium has been the modern state-mapping program. Although the first phase that concentrated on the production of 1 X 2 Regional Geologic Maps (scale 1:250,000 and covering Indiana and adjacent parts of bordering states) was completed in the early 1970's, the work of this phase had already made parts of the 1970 compendium (mostly a middle 1960's effort) obsolete. Further, new investigations, both field and subsurface, for the second state-mapping phase (single-sheet maps for both bedrock and Quaternary deposits; scale 1:500,000) have contributed to the same result. A third program that suggests the need for a revised compendium has been the project called "Correlation of Stratigraphic Units of North America" (COSUNA). Managed by the American Association of Petroleum Geologists, funded by the U.S. Geological Survey and also by private and industrial donations, and supported by hundreds of contributing geologists and scores of their government, academic, and industrial organizations, this project resulted in publication beginning in 1983 of 20 regional correlation charts, including the midwestern chart (Shaver and others, 1985). These charts cover the whole of the United States and show the complete stratigraphic record, Precambrian to Holocene and surface and subsurface. Two chronostratigraphic scales, one global and one North American, provide a single framework for the expression of the stratigraphic condition of all U.S. regions. General acceptance of this scheme of chronostratigraphic classification should result in further enhancement of stratigraphic knowledge and its use. The global scheme appearing on the COSUNA charts is ambiguous in part, however, because a nondefinitive "Series/Stages" heads the column showing the time-rock units that are subdivisions of a system. For example, the rank generally assigned by geologists the world over to "Lower Silurian"" and "Upper Silurian" is that of a series, but this rank is also generally applied to the geographically derived subdivisions of the Silurian System: Llandoverian Series, Wenlockian Series, etc. The Geologic Names Committee does not actively recommend use of such a dual system, but we think it is important to collate the different standard systems and so have shown two kinds of globally used series on plate 2, believing that neither subsystem nor stage is the most common rank assigned to the names shown in the global column. The revised compendium, therefore, uses the COSUNA system as shown on the left side of plate 2A-E. Only for a small part of these Carboniferous hierarchy do these charts depart from the COSUNA plan. Specifically, the COSUNA scheme, if generally accepted, will bring about changes in North American expression when such spatial and time terms as "Lower," "Middle," "Upper," "Early," and "Late" are used as parts of formal time and time-rock terms. For example, although "Middle Devonian" would mean what it previously did in Indiana and in North America generally, "Upper Ordovician" no longer would be synonymous with "Cincinnatian," and a "Middle Silurian Series" would no longer exist. The same terms, however, could be used as parts of indefinite expressions, applied to provincial circumstances, for example, but without capitalization.

Compendium of rock-unit stratigraphy in Indiana