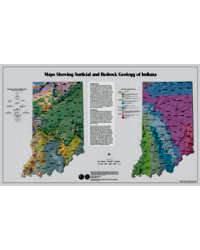 Geologists collect and summarize geologic information on many different types of maps. Two common types are those that show rocks and unconsolidated materials. Maps that show rocks or named rock units are bedrock geology maps, whereas maps of unconsolidated material, such as sand, gravel, mud, and soil, are surficial geology maps. Both maps illustrate and help define the distribution of distinct types of earth materials as projected onto the land surface. Surficial geology maps show unconsolidated materials at the earth's surface, and therefore, do not illustrate the distribution of these deposits below the ground. Bedrock geology maps show rocks and rock units at the surface of the bedrock, which may not be exposed at the earth's surface. In Indiana, bedrock is exposed only in the south-central part of the state and along some major rivers. In the northern half of the state, the bedrock is in places covered by more than 400 feet of glacial till, sand, gravel, and clay.