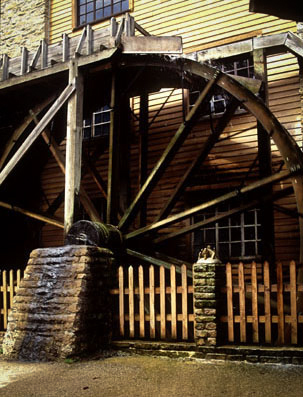 Spring Mill State Park is located near the town of Mitchell, Lawrence County, in south-central Indiana. The park has a variety of historical and natural attractions such as the restored pioneer village and interesting caves and is visited by nearly three-quarters of a million people each year. It is part of the very limited habitat of northern blind cave fish in Indiana, and Spring Mill Lake has considerable recreational potential.

The of the lake is approximately 21 square miles and is characterized by thousands of and a , which is typical of the Mitchell Plateau, a narrow physiographic region of the state that extends from Owen County to the Ohio River in Harrison County (see Landscapes of Indiana). In such an area, called , most precipitation travels underground into solution-enlarged conduits that in the area of study discharge as springs in Spring Mill State Park, including the waters issuing from the cave mouths. The water then flows a short distance in surface streams to recharge Spring Mill Lake.

The source of the water entering the park and Spring Mill Lake and its chemical composition, biologic condition, and must be understood in order to provide maximum protection to the park waters. During July of 1998, geologists from the Indiana Geological Survey and Indiana University and park personnel began a study under a federal grant in order to make recommendations to the community about land management practices in the surrounding karst area. 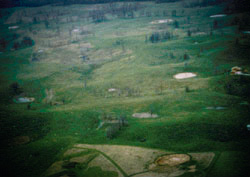 Plugged sinkholes form ponds that dot the landscape of the Mitchell Plateau.

Nitrogen enrichment and of the lake have been recognized as problems, and past complications indicate the presence of excessive pesticides. The water also is sensitive to other man-caused disturbances; for example, two highways, a railroad line, and numerous county roads lie within the drainage area of the lake, so that chemical spills and roadway de-icing substances may quickly and drastically degrade the quality of the water reaching the park. Agricultural practices and failed or inadequate septic systems in an area of expanding population affect water chemistry, and erosion from tillage and construction potentially increase sedimentation rates in the lake.

Two primary sets of information were needed. First, we needed to precisely define the limits of the drainage area of Spring Mill Lake. Geologists used , harmless dyes at very low concentrations placed in sinkholes to determine direction of flow of subsurface water in the cavernous bedrock of karst areas. Through a series of earlier dye traces, the southern and western limits of the Spring Mill Lake drainage basin were determined in general but needed to be more precisely delimited, and the boundaries of the remaining area also needed to be determined. Finding the individual drainage areas of Donaldson Cave, Hamer Cave, and the other caves and springs in the park was also important. 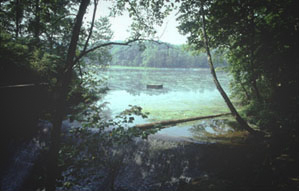 The tranquil waters of Spring Mill Lake may be threatened by harmful contaminants. 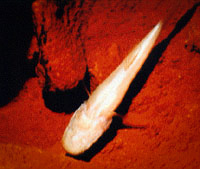 Several caves in the park are home to a relatively large population of rare northern blind cave fish. 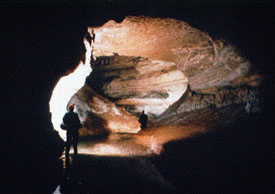 Secondly, to formulate a plan to provide information to help landowners in the surrounding area, it was necessary to identify the kind and amount of chemical and biologic contaminants as well as the amount of mud and silt entering the lake. Major variations in the quality of the water were expected between times of low water flow and after storms. Variations were also expected to occur throughout the year because of seasonal events, such as tillage; application of fertilizers to cropland; application of pesticides to highway and railroad right of ways, as wellimage as to cropland; and use of chemicals to de-ice roads in winter.

It was necessary to monitor water volume and quality over a four-year period to establish baseline information needed for planning for the future of Spring Mill Lake and its relation to human usage and conservation of the cave life. Monitoring concentrated on the major springs in the park although precipitation was measured at several stations around the area to learn the input into the karst system.

For additional information about the geology of the park, contact Nancy Hasenmueller (hasenmue@indiana.edu) at the Indiana Geological Survey, 1001 E. 10th St., Bloomington, IN 47405.

For more information about the park, go to the Spring Mill State Park Web page.