Escherichia coli (E. coli) is a bacterium that normally inhabits the intestines of humans and many other animals. When released to the environment, some strains of E. coli can cause illness or death through contamination in food and water. 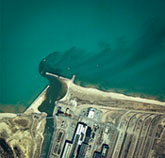 Each summer, public beaches along Indiana's southern Lake Michigan shoreline are closed periodically because of the presence of potentially harmful concentrations of E. coli. These closures have a significant economic impact and negatively affect tourism (Lake Michigan Federation). Human sewage is considered to be the primary source of the problem, and the role of combined sewage overflows (CSOs) and seepage and runoff from unsewered residential areas needs to be evaluated. Nonhuman sources also exist.

The Interagency Technical Task Force was formed in the mid-1990s to sample beaches and drainage networks and suggest possible avenues for mitigating the beach-closure problem.

A project by the Indiana Geological Survey to develop an early warning system for forecasting beach closures along Indiana's Lake Michigan shoreline resulted in a report titled Monitoring and Forecasting Outfalls of Streamflow Contaminated by E. coli at the Portage-Burns Waterway ("Burns Ditch"), Lake Michigan, Indiana.