Simply put, loess is a deposit of wind-blown . A blanket of loess is widespread across the hills of southern Indiana and is an important component of many soils. The term is of German origin and in America is pronounced in many ways, the most common of which is "lus." 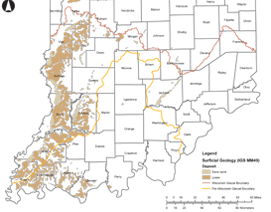 Major areas of loess in southern Indiana lie just east of the Wabash and White Rivers and south of the . During the several glacial events of the Pleistocene Epoch, or Ice Ages, and notably during the time of the later Wisconsin Glaciation, these streams carried large volumes of sand and in meltwater that flowed from the wasting glaciers. Raging torrents in summer, these streams were much smaller in wintertime, when the deposits of outwash sand and gravel in their valleys became dry. As a result of these adverse conditions, no significant vegetation grew on these valley flats, and they were easily stripped of fine sand and by the westerly winds of winter.

The fine sand in these clouds of dust was deposited close to the bluffs on the east sides of the Wabash and White River valleys, mostly in the form of dunes. The finer particles, mainly , were carried farther. Rain or snow may have helped to bring the dust to earth and vegetation that took root on the hills may have helped to fix the sand and loess in place. The was carried across the entire state, but only areas where the deposit of loess was thickest are shown on the map. Wind-blown can be recognized as a component of many soils, however, all the way east to the Ohio state line.

Although the word loess means "loose," it actually is cohesive and can stand in vertical banks in road cuts and along stream channels. When disturbed, however, for example by plowing, the cohesiveness is lost and it becomes extremely susceptible to erosion. Gullies resulting from poor farming practices of the past can be recognized in many parts of southern Indiana. Once picked up by moving water, can stay in suspension for a long time, hence some from Indiana loess has been washed great distances down the rivers toward the sea, although much has been deposited in lakes and on river flood plains.

Dust particles from as far away as Mongolia still drop to earth in Indiana as they are brought down by rain and snow, but the contribution of this material to the soil is minimal.