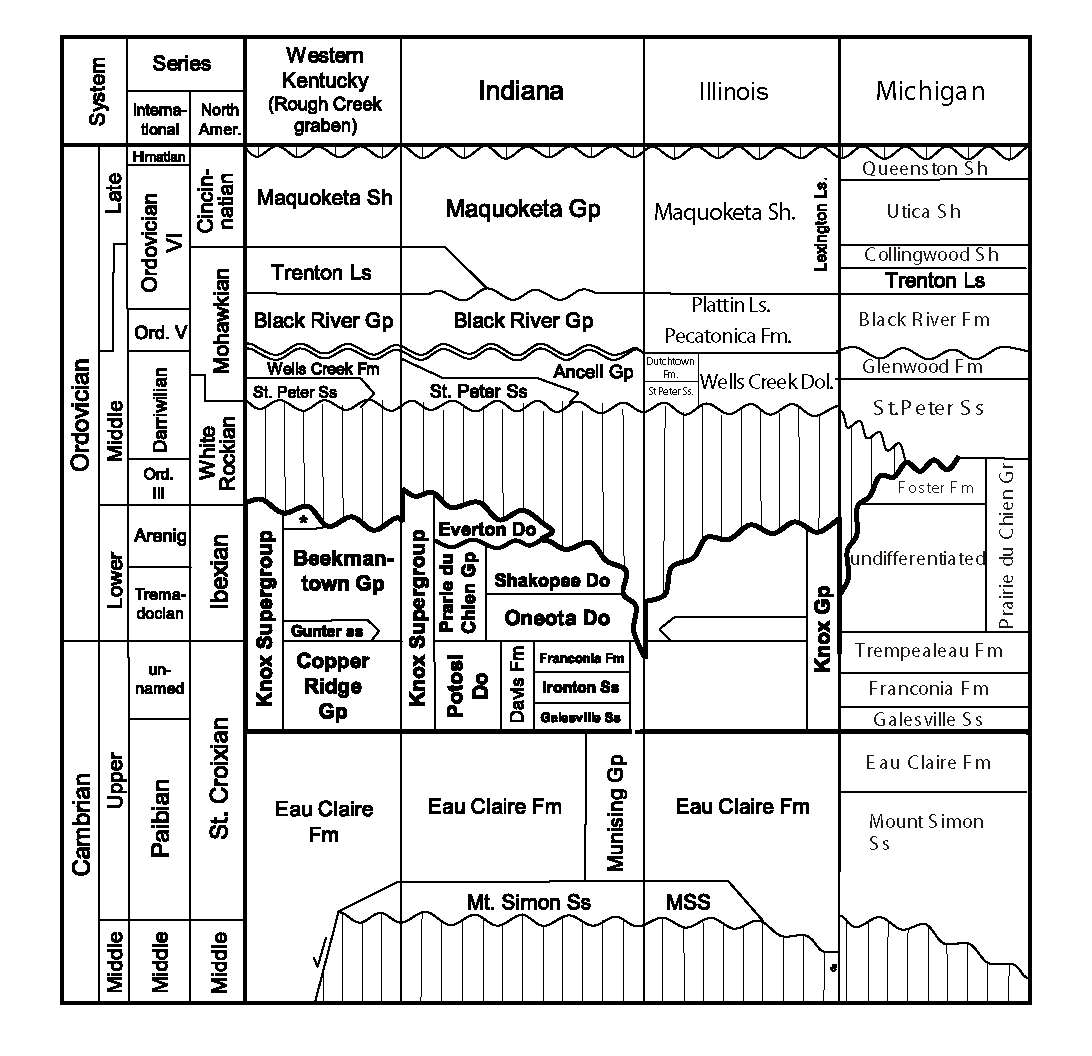 Indiana produces a great deal of energy, and approximately 70 percent of the state's CO2 emissions from stationary sources are produced from coal-fired power plants (NATCARB, 2011). As a result, geologic carbon capture and storage (also known as carbon sequestration) may be a promising technology for Indiana to reduce its CO2 emissions to the atmosphere. Carbon sequestration in underground geologic formations may be conducted in depleted oil and gas reservoirs, coal beds, or deep saline formations. The latter are particularly attractive in Indiana because of the distribution of these potential storage reservoirs in the subsurface and their favorable geologic characteristics. The main target reservoir identified for this purpose is the Upper Cambrian Mount Simon Sandstone, which is overlain conformably by relatively impermeable layers of the Cambrian Eau Claire Formation, a unit identified as a regional confining zone (also called caprock) in the Midwest (fig. 1).

The depth of the Mount Simon Sandstone is variable across Indiana, and ranges from less than 2,500 feet in northwest Indiana to more than 13,000 feet in southwest Indiana (fig. 2). The thickness of the Mount Simon Sandstone ranges from less than 400 feet in eastern Indiana to nearly 2,500 feet as it approaches its thickest accumulation in northwestern Indiana (fig. 3). For reasons of efficiency and safety, CO2 is stored at depths greater than 2,500 feet because its density is known to increase substantially at these depths, allowing greater quantities of CO2 to be stored in deeper formations. Therefore, although there are thick reservoirs of the Mount Simon present in northwestern Indiana, the unit is too shallow at this locality to be used as a storage system. 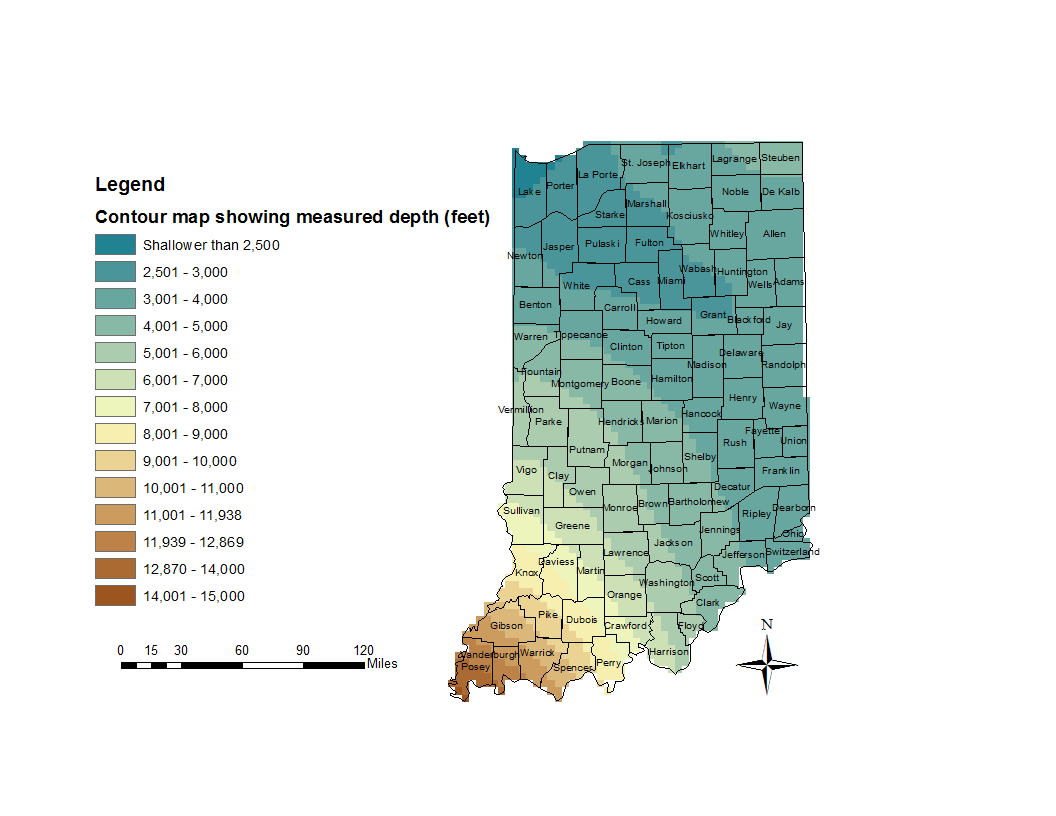 Figure 2.
Depth measured from ground surface to the top of the Mount Simon Sandstone. (click to enlarge) 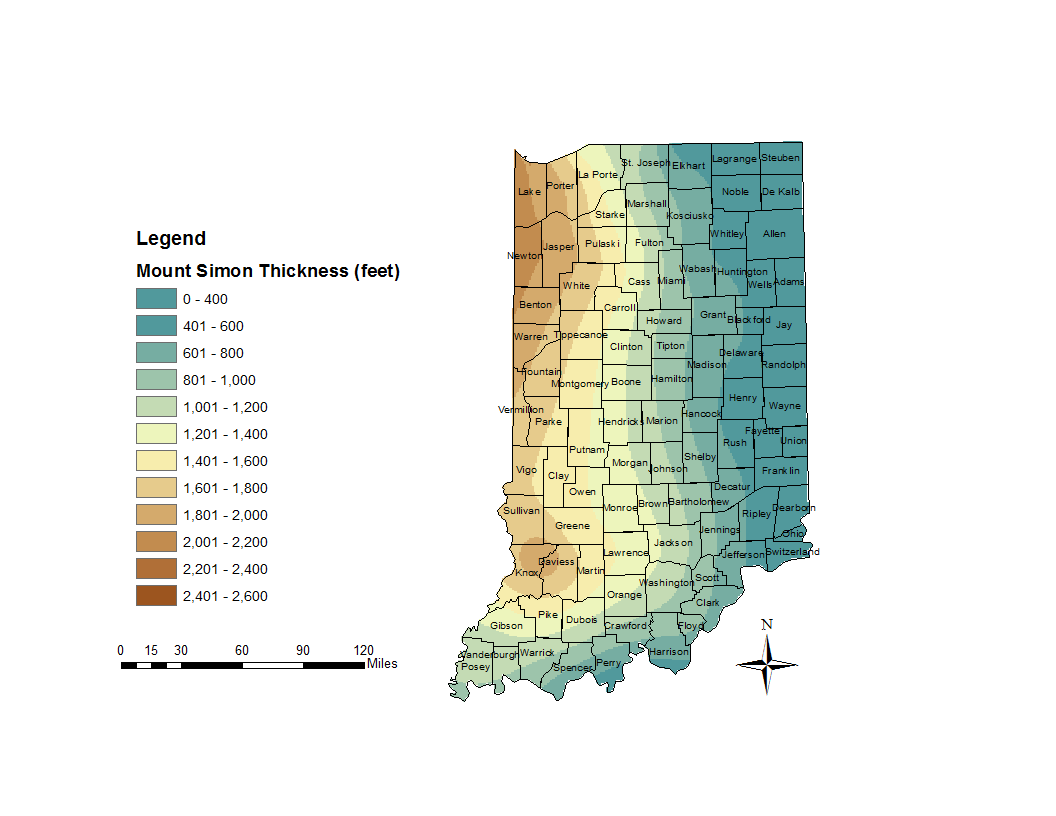 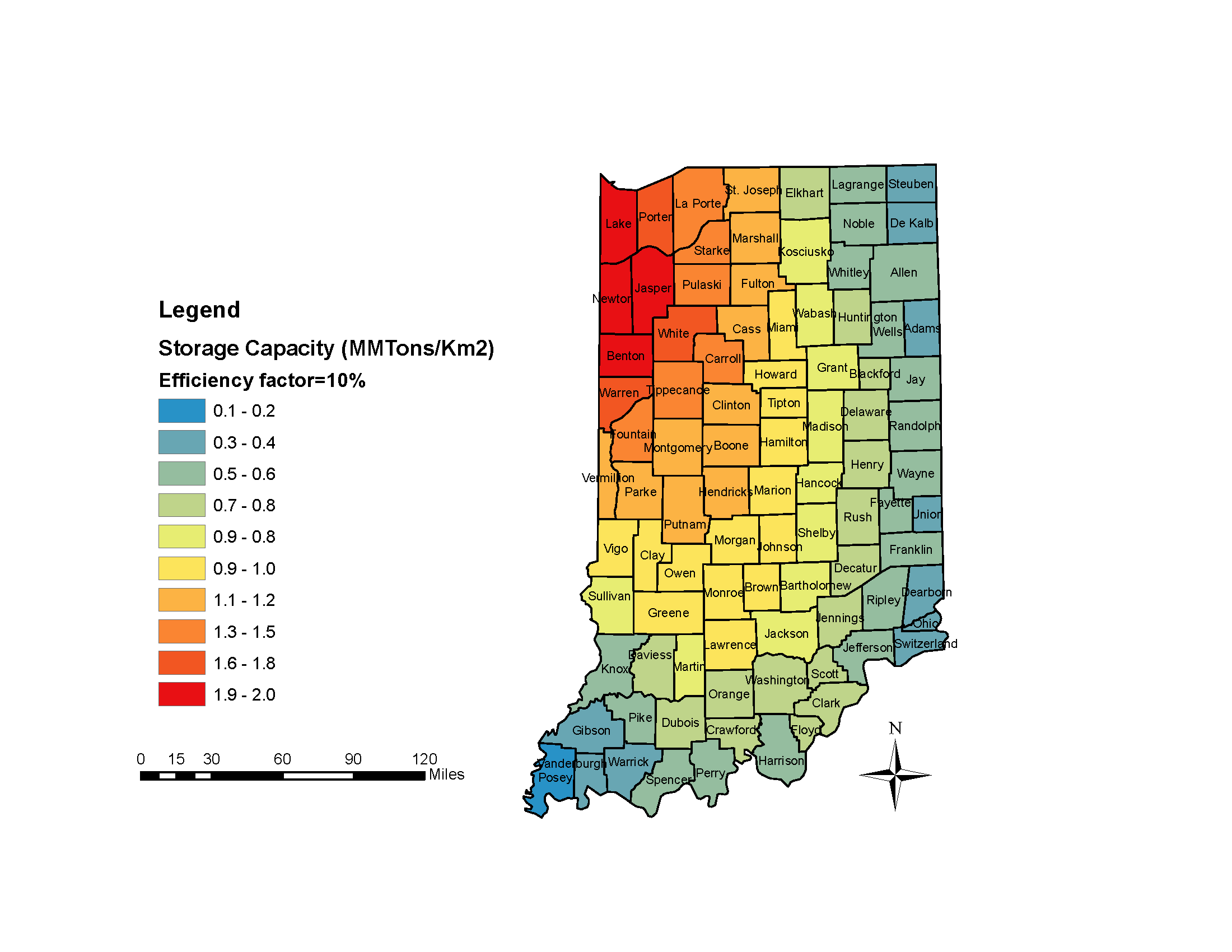 To estimate CO2 sequestration potential volumes in deep saline formations, knowledge of basic reservoir parameters such as porosity and density of the supercritical fluid of CO2 are required. The calculation was done according to the following equation (US DOE, 2008; Medina, 2011):

where SC = CO2 storage capacity in metric tons per unit of area; hn = net thickness (ft); øn = net average porosity (dimensionless); ρCO2 = CO2 density (roughly 47 lb/ft3); and ξ = storage efficiency (ξ =0.1 or 10%, figure 4), which is estimated by multiplying a combination of volumetric and reservoir performance parameters that reflect what portion of the subsurface will actually be occupied by carbon dioxide and how that CO2 will move through the reservoir. The volumetric portion of ξ takes into account three factors: net area to total area (area in the basin that has a suitable formation for injection), net thickness to gross thickness, and effective porosity to total porosity. These preliminary estimates of carbon dioxide storage capacity suggest that the highest potential occurs where the Mount Simon Sandstone is thicker and shallower (figure 4).

Medina, C. R., Rupp, J. A., and Barnes, D. A., 2011, Effects of reduction in porosity and permeability with depth on storage capacity and injectivity in deep saline aquifers - a case study from the Mount Simon Sandstone aquifer: International Journal of Greenhouse Gas Control, v. 5, p. 146-156.