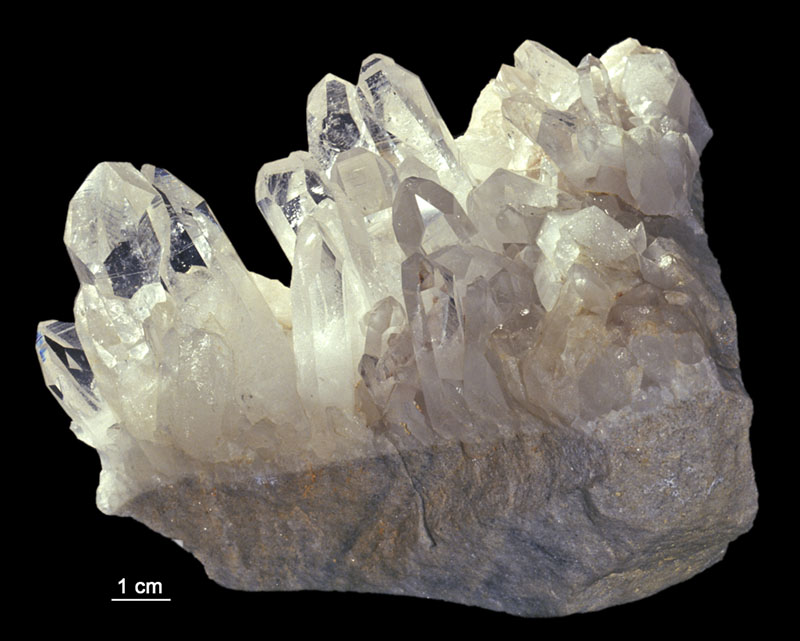 Quartz is one of the Earth's most abundant minerals. It has a simple chemical formula (SiO2) but is very stable and resistant retaining its identity even billions of years after its formation, extreme weathering and, transport.

Quartz (Fig. 1) has always played a large role in human technology. Critical items from some of man's earliest stone tools to latest electronic components were made of quartz. Native peoples of Indiana used quartz for many vital tasks. Today quartz is used in many products as a raw material for huge amounts of construction materials, such as glass, concrete, or mortar, and quartz is refined to yield silicon which is critical for computers and other high technology mainstay of modern life (Fig. 2). Quartz is still used for many modern Industrial materials (Fig. 3). 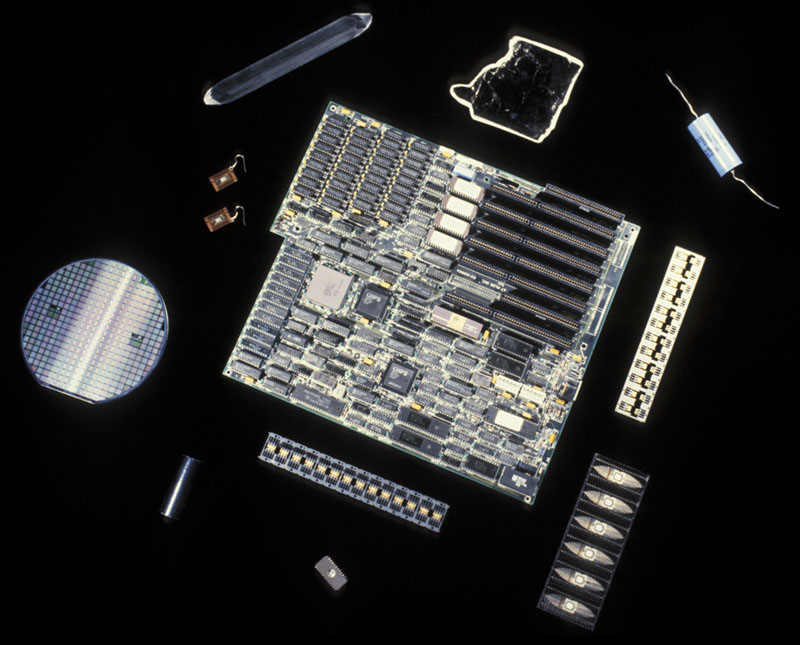 Quartz is made when atoms of silicon and oxygen bind in the form of a tetrahedron. The nature of the atoms and the resulting crystal structure (Fig. 4) lead to its extraordinary durability. Quartz has a scratch hardness of 7 and often forms hard, tough fragments that withstand all sorts of mechanical and chemical attacks. Crystals form clear hexagonal (6-sided) forms when space allows (Fig. 1).

Metamorphic rocks contain abundant quartz especially those produced from granites, sandstones, or shales. In particular, coarser-grained metamorphic gneiss is marked by distinct bands of quartz and other minerals. Sandstones are almost pure quartz.

Sedimentary rocks (those formed by physical or chemical accumulation of preexisting fragments of minerals or sediments) plus a few rocks formed by chemical precipitation are the most common in Indiana provide the largest quantity and greatest variability of quartz form.

Sandstone is composed of various sized grains of quartz derived from preexisting rocks and transported to ancient seas where grains were cemented together to form durable rocks. Quartz is present as very small size grains in siltstone and shale. Sizes and shapes of grains are important variables in sandstones. Indiana produces building stone from sandstone. We also produce pure quartz sand used to make glass.

Quartz can form by precipitation from low temperature waters with or without organisms. In Indiana, such chemically formed quartz is common as chert which is very fine grained, crystalline quartz. It forms as chalcedony in geodes and more spectacularly as beautiful, splendent crystals inside Indiana's beautiful and famous geodes (see elsewhere).

Quartz is a common, important mineral found all over Indiana. Some examples are outstanding though most are small and go mostly unnoticed. See if you can find some quartz.