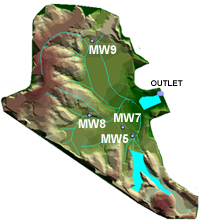 For the Midwestern Project Extension, water samples were obtained from four monitoring wells and the outlet of the final collection pond.

In February 1999, the Indiana Geological Survey reported on a project titled "Hydrology and Water Quality Associated with the Midwestern Reclamation Site (Site No. 1087), Pike County, Indiana." Later that year, the Indiana Division of Reclamation entered into an agreement with the Indiana Geological Survey, referred to as the "Midwestern Project Extension," to continue hydrological and hydrochemical investigations at the Midwestern Site through December 2001. The goals of the project extension were:

The FSS continues to serve as an effective barrier to recharge:

Surface water that is discharged from the site has not yet achieved a steady-state chemical equilibrium, and some of the improvements noted in the previous report (February 1999) have been lost:

Statistical analyses of trace-element concentrations in ground and surface waters indicate that in many cases the number of samples collected to date (normally 20 or less) are insufficient to quantify the mean concentrations with any certainty. In most instances, a large standard deviation relative to the average value causes the uncertainty to be great. The large standard deviations reflect the fluctuating concentrations that occur because insufficient time has passed for the waters to have approached a steady-state equilibrium.

A three-dimensional analysis of the distribution of waste and capping materials on the site indicates that the pyritic coal refuse is effectively encapsulated between impermeable shale bedrock and FSS. A geophysical survey using terrain conductivity and magnetometry indicates that the plume of contaminated water associated with the pyritic refuse is also effectively isolated from further recharge and there is no indication that any of the acid water in the refuse is finding its way to the site outlet. A three-dimensional animation was created that illustrates these relationships. The animation, which is 63 Mb in size, is available upon request.