Acid mine drainage (AMD) is the cause of many environmental problems associated with abandoned mine lands. Where AMD is present, the abundance and variety of plant and animal life is greatly reduced, so that the land is susceptible to erosion and streams are subjected to siltation. AMD is produced by the oxidation of the mineral pyrite, which is relatively abundant in the coal beds of Indiana and associated rocks. Reclamation of abandoned mine lands can be achieved by either preventing the formation of AMD or by treating it after it has formed. AMD can be prevented by removing pyrite from the mine site or by burying it to minimize its reaction with oxygen. Even if pyrite has already oxidized and AMD has been formed, the acid water and its load of dissolved contaminants can be treated by precipitating the dissolved iron, reducing the concentration of sulfate, neutralizing acidity, or by some combination of these approaches (fig. 1). 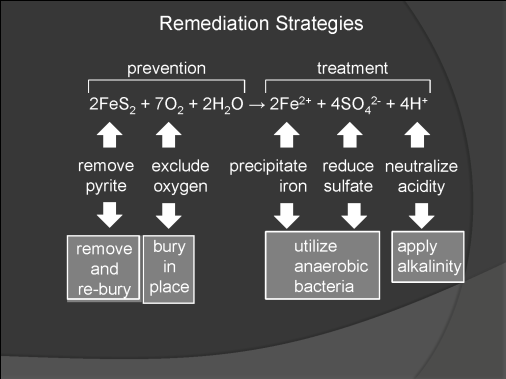 Figure 1. Generalized chemical reaction showing how iron, sulfate, and hydrogen ions are generated. Strategies for either preventing these chemical processes or treating their products are also shown.

Removal and re-burial of pyrite-bearing mine refuse is costly and has seldom been an economically viable reclamation option. In-place burial has proven to be effective in certain settings, using both capping (Branam and others, 2011; Naylor and others, 2010) and revegetation (Harper and others, 2011). By capping pyritic waste rock with impervious materials, the interaction between waste rock and infiltrating rainwater is limited, thereby reducing AMD production. Similarly, revegetation following the application of large quantities of alkaline materials (primarily agricultural limestone) increases evapotranspiration, which further reduces the amount of rainwater that percolates through the underlying pyritic refuse. Furthermore, the movement of oxygen into underlying waste rock is limited through the microbial decomposition of organic matter in the restored soil.

Many reclamation measures treat AMD by reducing the concentrations of chemical species on the right side of the equation in Figure 1. One early treatment approach was the anoxic limestone drain (ALD, fig. 2) that uses limestone (CaCO3) within a buried trench to generate alkalinity and neutralize acidity (see AMD article for overview of acidity and alkalinity). These structures can fail if any dissolved oxygen or oxidized iron (ferric iron) is present in the water that enters the system. This causes iron oxide to precipitate within the ALD, coating the limestone fragments and rendering them insoluble and unable to generate alkalinity. A more rapid failure occurs when sulfate concentrations in AMD are high enough to combine with calcium from dissolved limestone in the ALD to form the mineral gypsum, which sufficiently reduces porosity and permeability to clog the ALD.

In recent years, reclamationists have come to prefer designs that create a self-sustaining ecosystem that is moving toward equilibrium with adjacent undisturbed lands and, therefore, reduce maintenance costs. 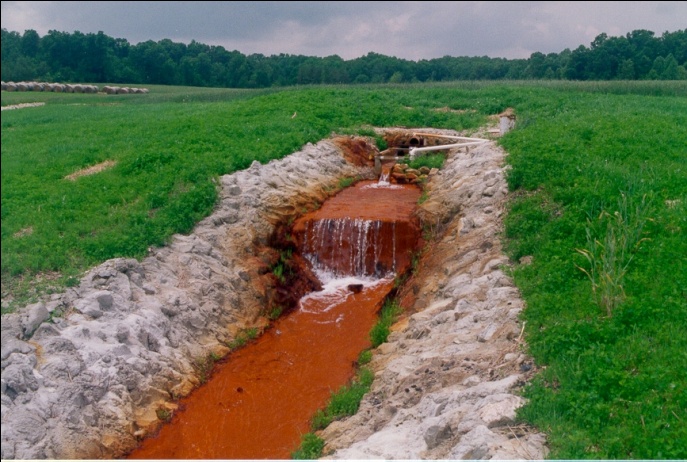 Figure 2. Anoxic limestone drain at the Midwestern reclamation site, Pike County, Indiana. Successful revegetation of the site is also shown in the area surrounding the ALD. Photo by Denver Harper.

Anaerobic constructed wetlands (fig. 3) contain both an alkaline substrate and biomass such as compost. These systems are designed to treat AMD flowing at both the surface and through the substrate, and large areas and quantities of water are required to attain a self-sustaining level of activity. If biomass is sustained, these systems can theoretically continue to function for decades without human intervention. Aquatic plants such as cattails (Typha latifolia) and reeds (Phragmites australis) remove metals from AMD by incorporating them into plant tissue, while organic substrates also remove metals via adsorption. The ability of biomass to successfully adsorb metals depends on the pH of water in the wetland, with pH > 4 representing the most effective range. Sulfate reduction is another important chemical process resulting in the precipitation of metal sulfides and generation of alkalinity. Although anaerobic wetlands also facilitate the precipitation of iron and other metals typically found in AMD, aerobic wetlands are designed with this as their primary chemical process, while also requiring less area for construction. 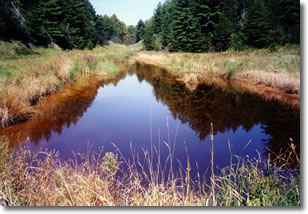 Because space is often a concern at abandoned mine land sites, and because reclamationists attempt to avoid further disturbance of natural surroundings, sulfate-reducing bioreactor cells (SRBCs) are a more recent development for treating remote springs issuing AMD. SRBCs combine the treatment features of both wetlands and ALDs, but unlike wetlands, they can be sized to fit smaller treatment areas and can treat low-flow waters that are highly acidic and mineralized. AMD is neutralized immediately upon entering the cell as it flows through a medium containing limestone-buffered organic substrate. Oxygen is depleted by aerobic bacteria, which then allows sulfate reduction by anaerobic bacteria that fixes metals and generates alkalinity. As the limestone and organic substrate are depleted, a reaction front is created with neutralization and sulfate-reduction only occurring at and beyond this boundary within the cell. Eventually, the spent materials must be removed and replaced in order to re-start the chemical processes. These cells are not designed to be self-sustaining, but potentially can be long-term passive treatments. The lifespan of a SRBC is currently unknown, as this treatment system is still relatively new.

Harper, D., Olyphant, G., and Branam, T., 2011 (in preparation), Direct revegetation and the sustainability of reclaimed mine lands - the story of the Friar Tuck Mine, Indiana, in Comer, J., ed., Effects of Abandoned Mine Land Reclamation on Ground and Surface Water Quality in Indiana: Indiana Geological Survey.