Hydrologic Suitability of Mine Spoil as a Medium for Septic-Tank Absorption Fields, Warrick County, Indiana by Denver Harper 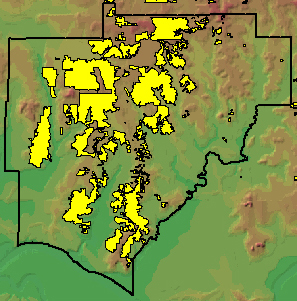 In cooperation with the Indiana State Department of Health (ISDH) and the Warrick County Department of Economic Development (WCDED), the Indiana Geological and Water Survey (IGWS) and the Department of Geological Sciences of Indiana University (IU) undertook a project to categorize deposits of mine spoil (the cast overburden from surface mining) and evaluate their hydrologic suitability for the installation of on-site sewage disposal systems. The project was divided into two principal phases: (1) Gather and organize maps from the most intensively mined county in southwestern Indiana, and create a geographic information system (GIS) that shows the distribution of graded and ungraded spoil, with and without soil covers; (2) Monitor hydrologic conditions within the immediate vicinity of active septic fields in three of the major categories of reclaimed land, and provide summary statements regarding movement of septic effluent through the soils developed in the major categories of reclaimed land. The project was sponsored by the Indiana Department of Environmental Management (IDEM), Section 319, Nonpoint Source Pollution Program. The term of the project was from April 1, 1998, to December 31, 2000.

Approximately 180,000 acres of Indiana have been disturbed by surface mining. Much of this land has distinct aesthetic advantages for residential development, such as forests, lakes, and (or) rolling terrain. Pressure for development in areas of mine spoil has recently been increasing. Substantial parts of some counties (as much as 50 percent of Warrick County) are now composed of such materials, and some suburban areas are encroaching on mined lands. The practice of installing residential septic fields in mine spoil has been questioned by officials of the Indiana State Department of Health (ISDH); however, because relatively little is known regarding the fate of septic leachate in these man-made materials. In some states, the use of septic fields in mine spoil effectively has been banned. This investigation was intended to foster the development of practical criteria that could be used to evaluate various mine-spoil areas for installation of septic fields throughout the Indiana coal field and, thereby, protect ground water and surface waters. By removing uncertainties regarding the hydrologic suitability of such areas, a potential obstacle to the development of these large tracts of real estate could be eliminated. 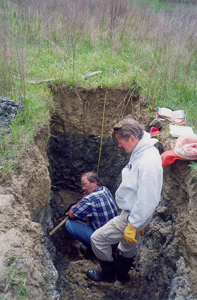 Soil pit being described at a monitoring site.

Mine spoil does not resemble soil and, hence, cannot be evaluated by soil scientists for septic field suitability using conventional methods of inspecting natural soil horizons. Spoil is composed of a variety of rocks and minerals having differing chemical and physical characteristics and in varying proportions and sizes. But despite spoil's compositional heterogeneity, certain categories can be identified on the basis of mining and reclamation techniques that were employed at the time of the spoil's creation, as well as the character of the overburden from which the spoil was derived. In order to evaluate sites for septic field suitability, guidelines are needed that incorporate readily available (or cheaply attainable) information, such as the topography of the spoil deposit and the thickness of any soil cap that was applied to the deposit.

Surface mining and reclamation methods have evolved through the years. The earliest mine operators created steep, ungraded spoil ridges, which were often planted with trees. After 1967, the State of Indiana established standards for leveling peaks and ridges on land to be used for row crops, pasture, and forest. In 1977, the federal Surface Mining Control and Reclamation Act (SMCRA) was enacted, establishing performance standards dealing with topsoil, hydrology, contour of the land, and revegetation following mining. 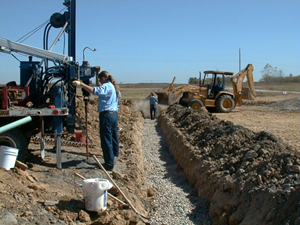 In consultation with the Indiana State Department of Health (ISDH), the Warrick County Department of Economic Development (WCDED), the Indiana Division of Reclamation (IDOR), coal mining companies, and local developers, several major categories of spoil were targeted for reconnaissance investigations to determine hydraulic properties of the major spoil types. Three sites were then selected for experimental plot investigations. At each of the three experimental sites, continuous measurements of hydrologic conditions were conducted throughout at least one complete annual weather cycle. This allowed temporal variability of hydrologic conditions (resulting from seasonal and shorter-term weather changes) to be assessed.

The experimental plots were designed to evaluate those hydrologic properties of spoil that determine which types of septic fields are feasible. Hydrologic conditions were monitored from the ground surface to the water table, so that any problems that might lead to either surface-water or ground-water contamination could be identified. Each monitoring installation was deployed in the vicinity of a newly constructed septic field, because the construction of such fields may alter the hydrogeologic character of spoil. 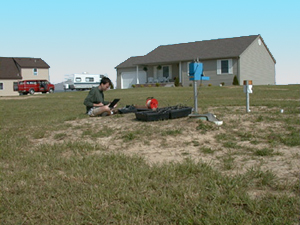 Downloading data from a monitoring site on reclaimed mine spoil.

The experimental plots contained instruments that allowed measurement of rainfall, computation of infiltration, runoff, and soil evaporation, determination of the movement and storage of soil water, and variations in the elevation of the water table. All the instruments were connected to electronic data loggers that routinely stored data at hourly intervals. Because the stream of data was continuous, the loggers could also be programmed to collect data at shorter intervals, such as during storms or periods of heavy septic discharge. In addition, water samples were collected from different depths for chemical and bacterial analysis. All analyses of water samples were performed in the laboratories of ISDH. 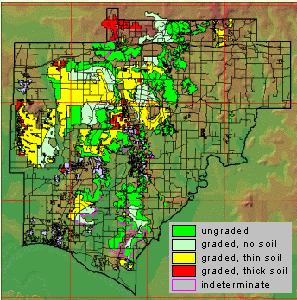 Hydrologic monitoring indicated that Category 1A (unreclaimed spoil) allows the greatest amount of vertical water movement and the most rapid ground-water recharge. In Categories 2 and 3, the layer of restored topsoil effectively traps infiltrated precipitation and thereby inhibits vertical percolation through the unsaturated zone.

Because the residence at Site 3 was never occupied during the period of monitoring, the chemistry values from that location were used to indicate natural background conditions in the study area. At Sites 1 and 2, there was no indication that leachate from the active septic disposal systems was reaching the saturated zone. The deepest penetration of septic leachate occurred at Site 1 (Category 1A), where elevated values (14 mg/L) of nitrate-nitrite were observed at a depth of about 1 meter below a septic system finger. At Site 2 (Category 2) the concentration of nitrate-nitrite was reduced to less than 3 mg/L by the time leachate reached a depth of 1 meter.

On the basis of the data gathered during this investigation, there is no indication that leachate from on-site septic disposal systems poses a threat to ground water in the spoil-covered areas of Warrick County. Where layers of restored topsoil are present, movement of leachate is retarded and rendered harmless by the low permeability of the compacted topsoil layer. Where no such retarding layer is present, the great thickness of the unsaturated zone, consisting largely of clayey shale, absorbs and dilutes the downward percolating leachate. Therefore, any water that reaches the saturated zone is of relatively good quality.