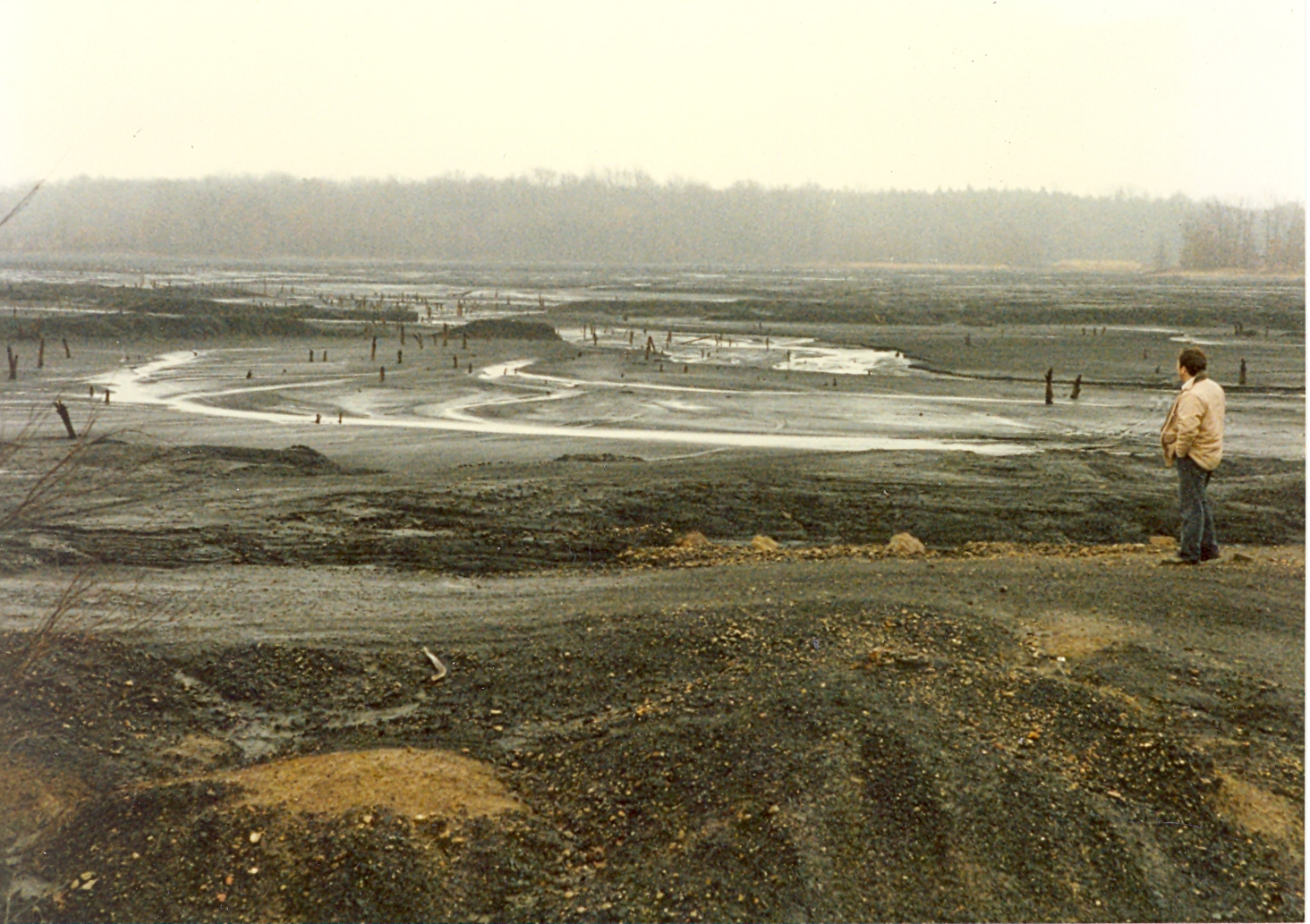 A deposit of fine-grained coal-preparation refuse (slurry) before reclamation

Indiana is currently the sixth largest coal-producing state in the United States, and it has a long history of coal mining. Large-scale mining has been conducted by both underground and surface methods. Both of these methods necessarily involve the movement of large volumes of earth materials, including bedrock, unconsolidated surficial deposits, and soils.

In Indiana, underground mining has been conducted using room-and-pillar methods; there has never been any significant mining using longwall methods. More than 900 million tons of coal has been removed, and more than 194,000 acres are underlain by underground mines, most of which are abandoned. Although a few operations have practiced full recovery with pillar removal, most of the room-and-pillar mines practiced partial mining. Consequently, 20 to 50 percent of the coal on a property was left as pillars. Many of the void spaces created by this mining are now filled with groundwater. It has been estimated that the void spaces left my mining may contain a total volume of more than 172 billion gallons of water (Harper and others, in preparation). 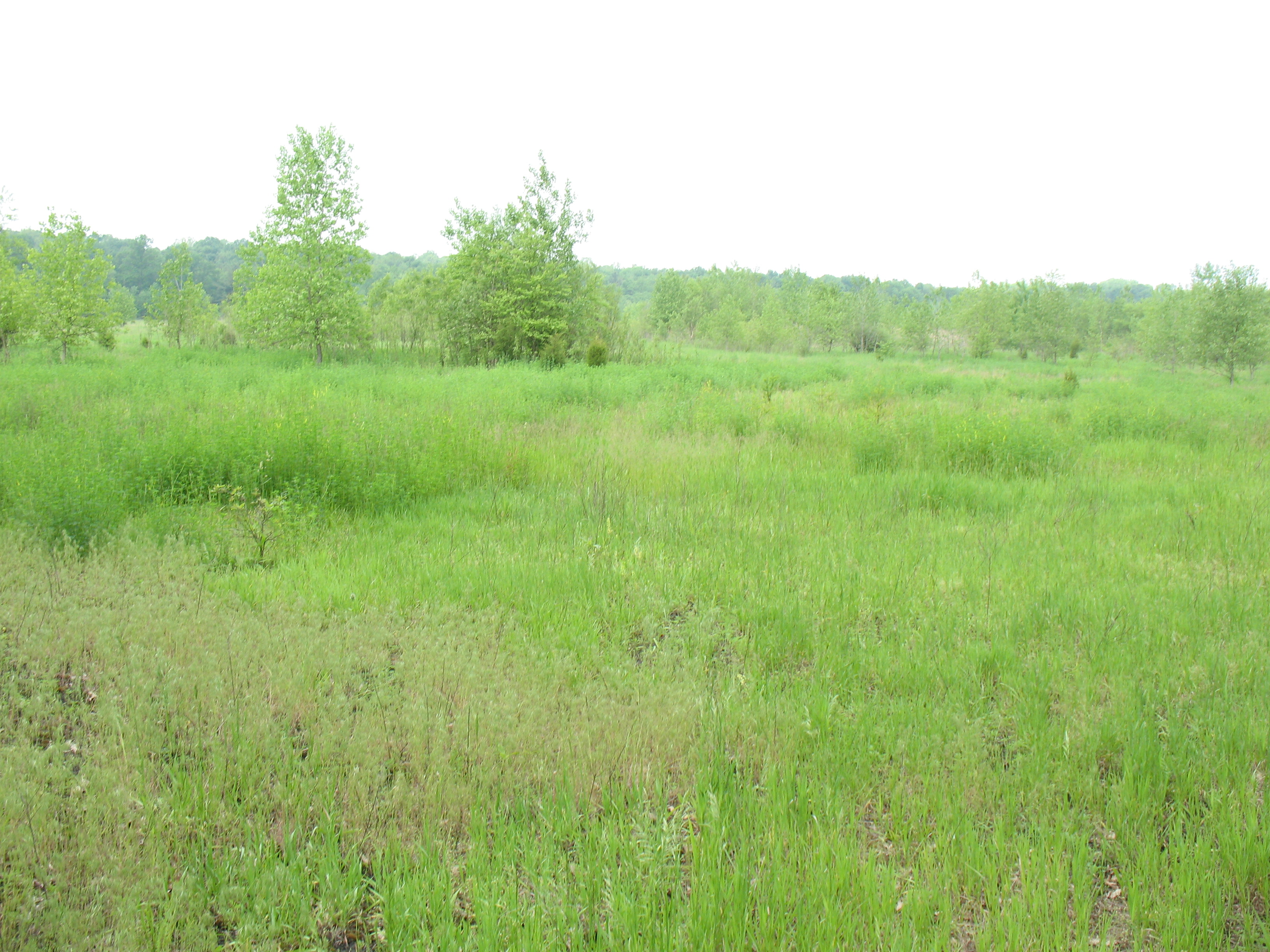 A deposit of fine-grained coal-preparation refuse (slurry) after reclamation.

In Indiana, surface mining has primarily involved the use of area-mining techniques. With underground mining, the mine operator attempts to remove only the coal, with as little disturbance of other rock as possible. But with area mining, large volumes of earth materials that overlie the coal bed (referred to as "overburden") are removed and placed to the side. The coal is then removed in a separate operation. The displaced overburden is referred to as "spoil." No one has ever attempted to estimate the total volume of overburden that has been displaced by surface mining in Indiana, but coal at depths as great as 150 feet has been mined, so that the total volume of spoil is very large.

Although most of the coal produced by mines in Indiana was burned for the production of steam, much of the coal was processed on or near the mine site to remove incombustible rock and acid-generating pyrite that were mixed with the coal. At such coal-preparation facilities, two general types of refuse material were generated: coarse-grained refuse (commonly referred to as "gob") and fine-grained refuse ("tailings" or "slurry"). Large deposits of these materials—which are enriched in the acid-generating mineral, pyrite—are scattered across southwestern Indiana. It has been estimated that the total area of slurry deposits, alone, is as much as 2,765 acres (Harper and others, 2008, 2009). The total volume of slurry may range from 94 to 136 million cubic yards and may contain from 22 to 69 million tons of recoverable coal. A few slurry deposits have been re-mined to recover the coal, but gob deposits, whose total volume has not yet been estimated, do not contain any recoverable coal. 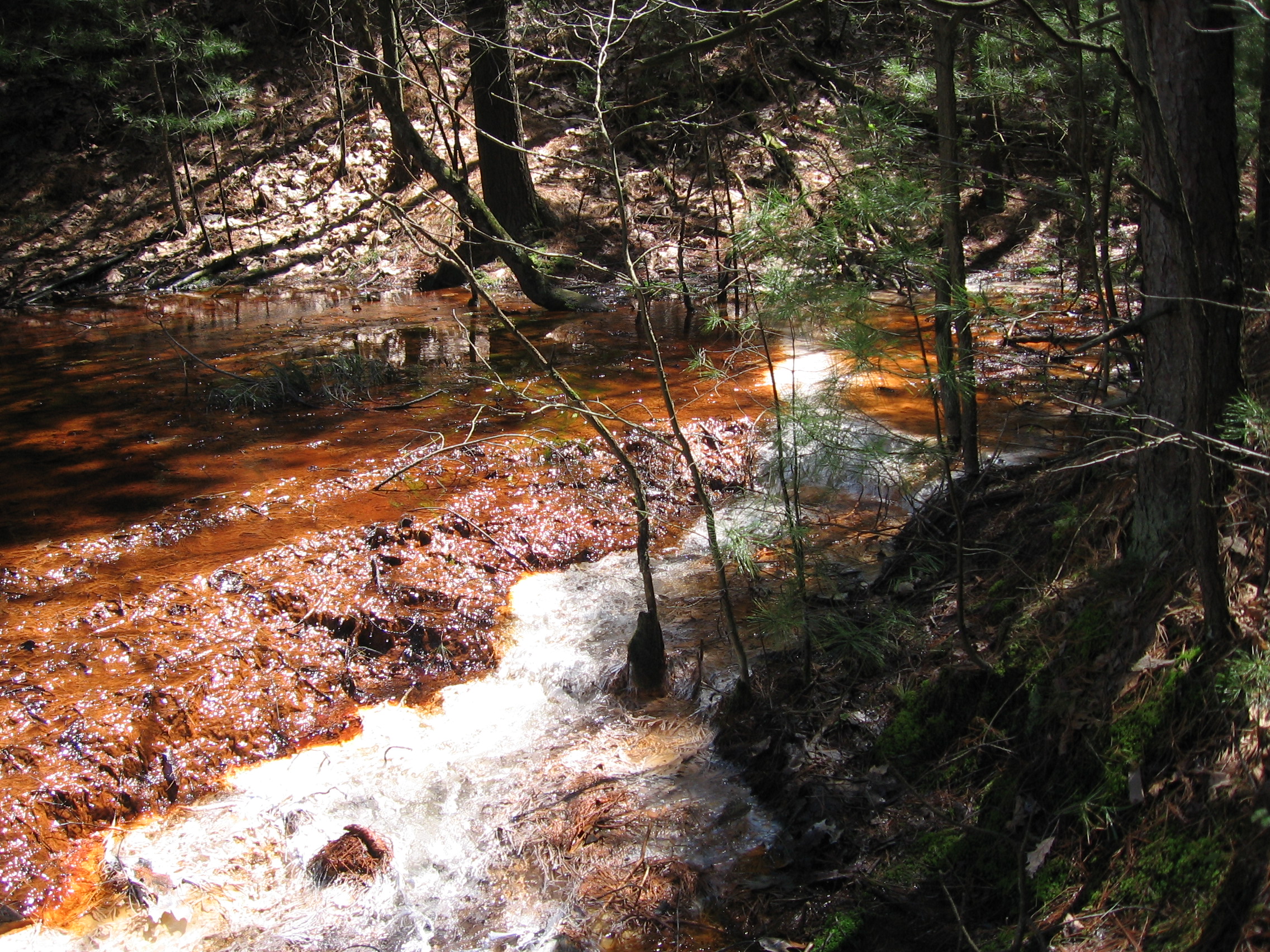 A large spring of acid mine drainage that issues from the base of a spoil deposit.

Since passage of the federal Surface Mining Control and Reclamation Act (SMCRA) in1977, coal operators have been required to reclaim their spoil and refuse deposits. Most refuse deposits that were created before that date have been reclaimed by the Indiana Division of Reclamation with funding from the Abandoned Mine Lands Program. Proper reclamation ameliorates many of the environmental effects of coal mining. Nevertheless, many significant problems remain, and these are primarily associated with mining that occurred before the passage of SMCRA. In particular, the pyritic deposits of gob and slurry continue to shed acid mine drainage (AMD) that finds its way into groundwater and surface streams (Harper and others, in preparation; Branam and others, in preparation). Most deposits of spoil are not enriched in pyrite and do not create problems with AMD, although acid-generating spoil does occur in a few places. Large volumes of acidic water may also reside within flooded underground mines, and this water may also contribute to the contamination of surface and groundwater on a sustained basis (Harper and others, in preparation). References

Harper, D., Olyphant, G., Branam, T., and Nawrot, J., in preparation, Direct revegetation and the sustainability of reclaimed mine lands - the story of the Friar Tuck Mine, Indiana, in Comer, J., ed., Effects of Abandoned Mine Land Reclamation on Ground and Surface Water Quality in Indiana: Indiana Geological Survey.